Turn on suggestions
Auto-suggest helps you quickly narrow down your search results by suggesting possible matches as you type.
Showing results for
Show  only  | Search instead for
Did you mean:
Conferencing Policy Settings: AllowUserToScheduleMeetingsWithAppSharing
By

So is the AllowUserToScheduleMeetingsWithAppSharing setting somehow different from the other policy settings? Well, no, not really: once you know what the AllowUserToScheduleMeetingsWithAppSharing setting is for it turns out to be pretty simple and straightforward, too. But this one is a wee bit more complicated than most settings, if only because it seemingly-conflicts with the EnableAppDesktopSharing setting. How do those two settings conflict, and who wins if and when they do conflict? We'll get to that in just a minute.

But first things first. As you probably know, Microsoft Lync gives the chance to share things during a meeting or a peer-to-peer session: by default, you can share either you entire desktop (which essentially means sharing your entire computer) or a specific application. It's up to you.

And what exactly does it mean to share your desktop or an application? It means two things. First, it means that everything you do on your computer (or in that single application) is visible to everyone else in the meeting; for example, if you're typing away in Microsoft Word, everyone will be able to see what you're typing, how you're formatting the text, etc., etc.

Second (and, again, by default) anyone in the meeting can ask to take control of your desktop or your shared application. Again, suppose you're sharing Microsoft Word. Anyone else in the meeting could request to take control of the application and, if you say OK, they'll be able to start typing in Word. It's your copy of Word and it's running on your computer, but someone else can sit at their desk and type away as if the application belonged to them.

That's the easy part. Now here's where things get a little complicated. (But just a little.) As we noted a minute ago, there are two different conferencing policy settings that control application sharing. The EnableAppDesktopSharing setting is a per-user setting that allows a given user to share:

· His or her desktop

And what if you'd just as soon that this scenario doesn't crop up? That's where the AllowUserToScheduleMeetingsWithAppSharing setting comes in. This setting applies to the organizer of the meeting and lets you determine whether or not anyone in a meeting will be allowed to use application sharing. If this value is set to True (and if the meeting organizer is allowed to share his or her desktop) then that organizer will see something like this when he or she clicks on the Share menu in the Conversation window: 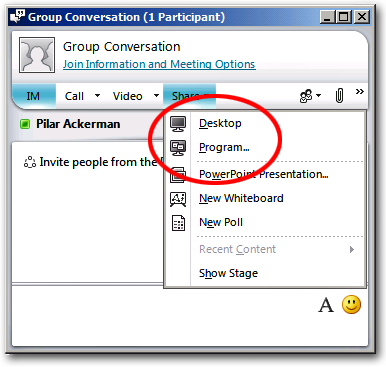 Meanwhile, everyone else in the meeting will see whatever options have been granted to them using the EnableAppDesktopSharing setting in their conferencing policy.

Got that? OK. Now suppose our meeting organizer has a conferencing policy in which AllowUserToScheduleMeetingsWithAppSharing has been set to False. In that case, the meeting organizer, and everyone else in the conference , will see something like this when they click the Share menu: 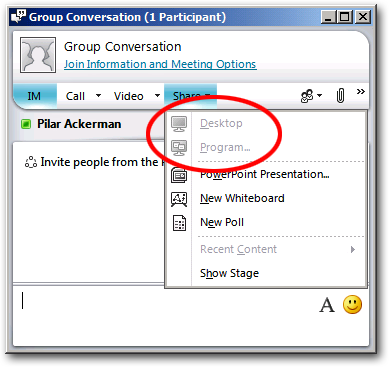 In other words, suppose we have two users and two conferencing policies. Like, say, these two:

Incidentally, here's some sample code for disabling application sharing in a meeting organized by anyone who uses the global conferencing policy:

And here's code that enables application sharing in a meeting organized by anyone who uses the global conferencing policy: