Turn on suggestions
Auto-suggest helps you quickly narrow down your search results by suggesting possible matches as you type.
Showing results for
Show  only  | Search instead for
Did you mean:
Conferencing Policy Settings: AllowAnonymousParticipantsInMeetings
By

This article is part of the series An In-Depth Guide to Conferencing Policy Settings .

So with Microsoft Lync Server 2010, you probably have a very exclusive, very restricted list of people you can invite to meetings, right? Right.

No, wait: that's not right at all. Instead, you can basically invite anyone in the world to one of your meetings, even people who do not have accounts in your Active Directory domain (so-called "anonymous" users). How do you do that? Well, here's one way. From inside the meeting, click the Join Information and Meeting Options link. That will bring up a dialog box that shows the URI for your meeting: 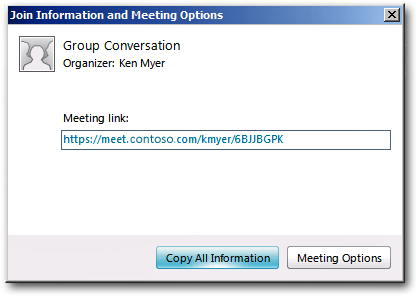 Send that URI to anyone in the world (or at least anyone who has a supported Web browser) and they'll be able to access the meeting URI. At that point, they'll be presented with the following logon screen: 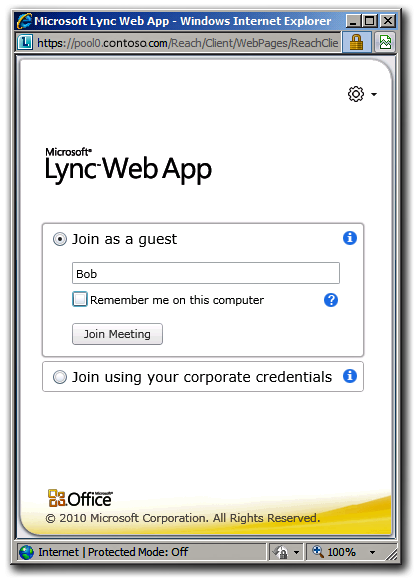 As you can see, people have the option of logging on using their organization credentials (assuming they have any) or of logging on anonymously. In the preceding dialog box, the user is logging on as a guest, and has chosen the screen name Bob . After clicking OK (and depending on how Lync Server has been configured) our anonymous user will then be admitted to the meeting lobby, where they'll sit until someone with presenter rights admits them to the meeting: 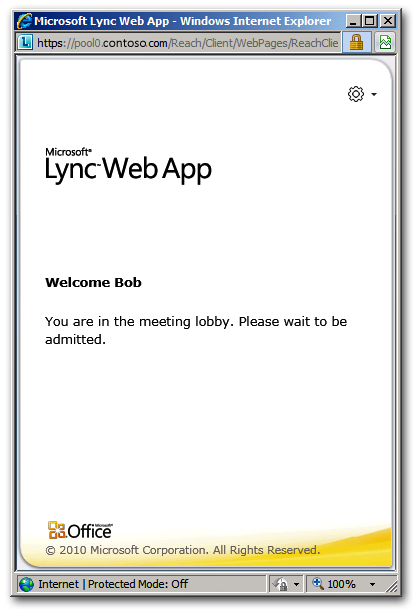 And what happens when someone with presenter rights does admit them to the meeting? At that point they will, well, be admitted to the meeting: 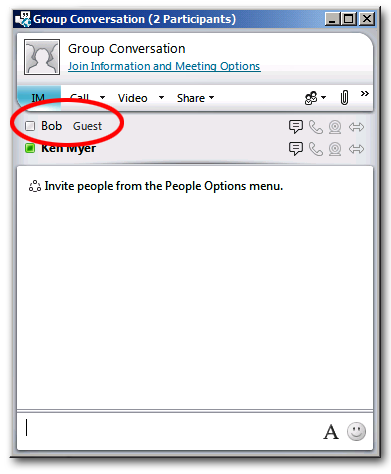 Kind of a nice feature, don't you think?

Oh, we see: you don't think it's a good idea for your users (or at least for some of your users) to be inviting every Tom, Dick, and Harry to their meetings. But that's fine. With Lync Server conferencing policies (and with the AllowAnonymousParticipantsInMeetings setting) you can prohibit your users from hosting meetings that allow anonymous users. To do that, simply set the value of AllowAnonymousParticipantsInMeetings in the appropriate conferencing policy to False:

Note . Or, set the value to True to allow anonymous users in meetings:

So what happens if you disallow anonymous participants in a meeting? Well, you can still retrieve the meeting URI, and you can still send that URI to anyone you want to. However, this is what happens to anyone who tries logging on as a guest, without supplying a valid user name and password: 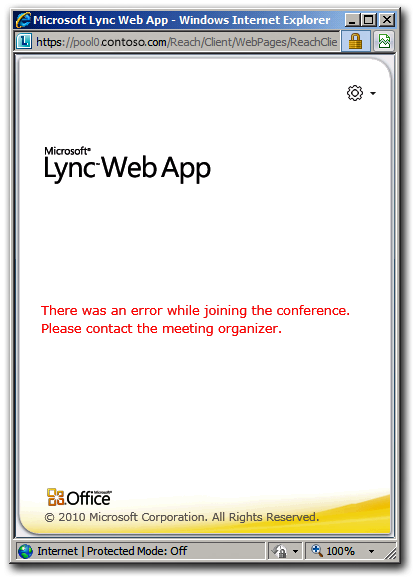 In case you're wondering (and, in this case, you should be wondering), AllowAnonymousParticipantsInMeetings is a per-organizer setting; that means it applies to the user who organizes the meeting. And what does that mean? Well, suppose we have two users and two conferencing policies:

And yes, that was an easy one, wasn't it?