Turn on suggestions
Auto-suggest helps you quickly narrow down your search results by suggesting possible matches as you type.
Showing results for
Show  only  | Search instead for
Did you mean:
Conferencing Policy Settings: AllowPolls
By

How many times have you sat in a meeting and said to yourself, "This would be a pretty good meeting if there was just a way for me to poll all the participants and find out who their favorite Marx Brother was?"

Really? Interesting; that happens to us in just about every meeting that we sit through. (Which wouldn't surprise you if you ever had to sit through some of the meetings we've had to sit through.) Be that as it may, the ability to poll meeting participants about pretty much anything (not just the Marx Brothers) is actually one of the more interesting features included in Microsoft Lync. And, as it turns out, it's also one of the easiest features to use; all you have to do is select New Poll from the Share menu: 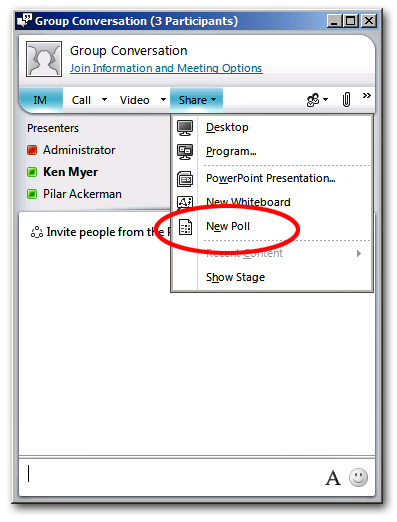 From there you can then create a new poll and, once you're satisfied, click OK to present that poll to everyone in the meeting: 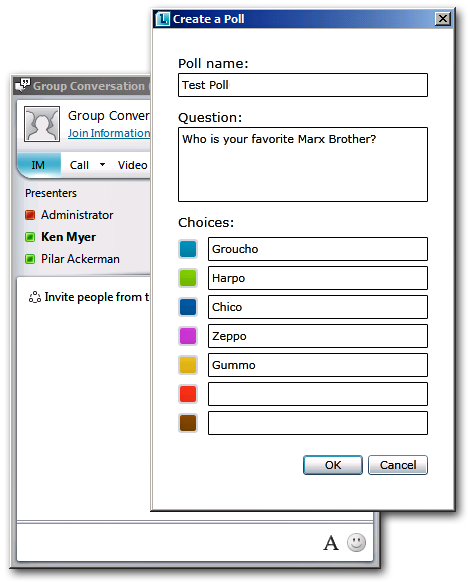 On the other hand, you might not be as excited about allowing users to conduct polls as we are. And that's fine: in that case, all you have to do is find the appropriate conferencing policy and set the AllowPolls property to False. You know, like this:

Do that, and the New Poll option will no longer be available in any meeting organized by a user affected by the modified conferencing policy: 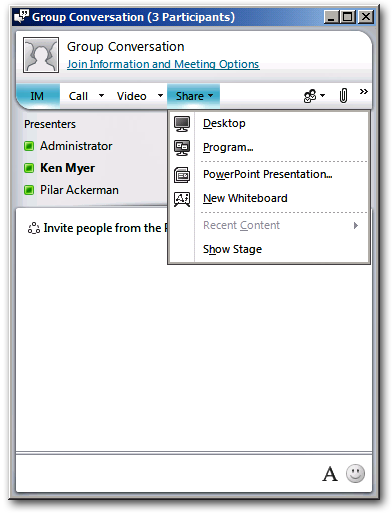 Now, it's important to understand that this setting affects the organizer of a meeting and, as a result, everyone else taking part in that meeting. Suppose we have a pair of users and a pair of conferencing policies:

As you can see, Pilar's conferencing policy does not allow polls; that means that the New Poll option will not be available to anyone who takes part in a meeting that Pilar organizes. (Nope, even Ken Myer won't be allowed to create a poll.) By contrast, Ken Myer's conferencing policy allows polls; thus anyone who participates in a meeting that Ken organizes will be allowed to create a poll (yes, even Pilar). That's because this setting applies to the meeting organizer and, by extension, to every single person who participates in that particular meeting .

What if you change your mind and decide that polls aren't so bad after all? No problem; just switch AllowPolls back to True: