Turn on suggestions
Auto-suggest helps you quickly narrow down your search results by suggesting possible matches as you type.
Showing results for
Show  only  | Search instead for
Did you mean:
Conferencing Policy Settings: AllowIPVideo
By

Remember the song Video Killed the Radio Star ? If you don't, the song basically says that, once television and video became popular, then radio was doomed:

In my mind and in my car, we can't rewind we've gone too far.


Pictures came and broke your heart, put the blame on VTR.

After all, once you've seen video, who's ever going to care about plain old audio again? And there's nothing you can do about that, is there?

Well, not necessarily. Take Microsoft Lync 2010, for example. Video is a key component in Microsoft Lync: by default users are allowed to conduct video conferences and to make video calls. At the same time, however, we also realize that, in some organizations, administrators might not want users clogging up the network with bandwidth-intensive video conferences. That's why the conferencing policies used in Microsoft Lync Server 2010 all feature the AllowIPVideo setting.

Um, why do the conferencing policies used in Microsoft Lync Server 2010 all feature the AllowIPVideo setting? Here's why: because that setting lets you (the administrator) decide whether or not users can host online meetings that include video. Would you prefer that your users (or at least some of your users) not be able to host video conferences? No problem; in that case, simply track down the appropriate conferencing policy and set the value of AllowIPVideo to False:

Or, if you'd prefer to allow video, then set AllowIPVideo to True:

So is there anything you need to keep in mind when working with the AllowIPVideo setting? Well, now that you mention it, there are two things that you need to keep in mind. First, this setting applies only to conferences: communication sessions that involve three or more people. If you want to prevent users from making peer-to-peer video calls ("peer-to-peer" being defined as a session that involves just two people) then you need to modify the EnableP2PVideo setting.

Second, AllowIPVideo is a per-organizer setting: that means the setting applies to the person who organized the meeting and, by extension, to everyone who participates in that meeting. What does that mean? Well, suppose we have two users with two different conferencing policies: 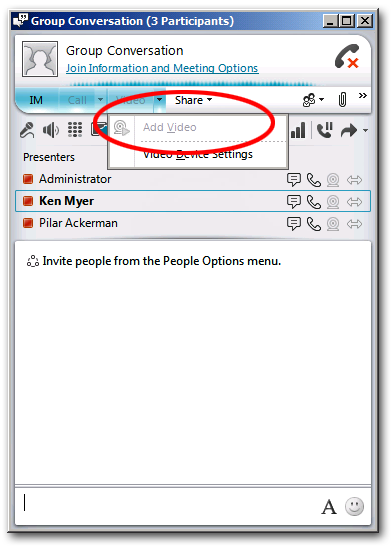 OK, now suppose Ken Myer hosts a meeting. Will Ken be allowed to use video in that meeting? You bet he will. And so will everyone else in the meeting. That's because, when it comes to video conferencing, the only thing that matters is the meeting organizer's conferencing policy: 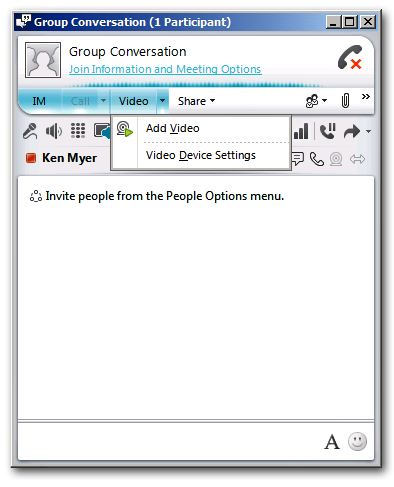 Oh, and before you ask, we tried that. Suppose we're allowed to do peer-to-peer video but not allowed to do video conferencing. With that in mind, we start a peer-to-peer session, a session in which video is allowed. Now, what happens if we add a third person to that session; will we be allowed to use video in that three-person session? Nope; once we add a third person, and start using Lync Server's conferencing capabilities, we lose the right to use video in the session. Furthermore, we won't be able to use video even if someone drops out and we go back to a two-person get-together: once a conference, always a conference. At that point the only way to use video is to discontinue the session and start a new peer-to-peer session.