Unable to edit or save List View in SharePoint - "Phantom Column"

Unable to edit or save List View in SharePoint - "Phantom Column"

I have a site that is made up primarily of several lists. Late last week, I stumbled upon an issue with one of the lists that prevented me from editing the list's View, or saving the current view under a new name. This is the screen I get when I click on the dropdown "edit view:" 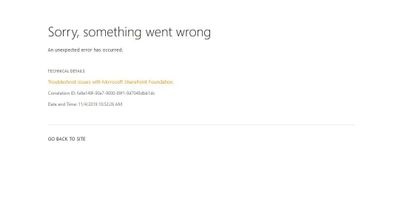 And this is the error I get when trying to save the current view under a new name (the view's name is the default "All Items," and my new name is "TestView"): 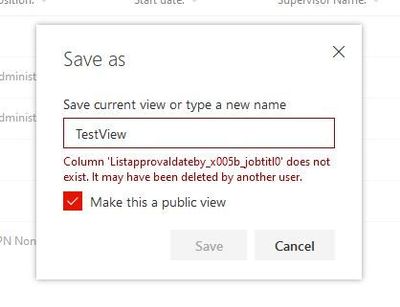 My guess is that I have somehow left a "phantom column" somewhere on this list but have no access to it, and neither does SharePoint, so it freaks out whenever it tries to look at a view. But I have no idea of how to clear out the phantom or how to save/edit the view otherwise.

(note: as far as i can tell, no other functions on the list or site have been affected apart from editing the view of this particular list. Also there is no evidence of the "phantom" column in any advanced setting or column list in the settings.)

Re: Unable to edit or save List View in SharePoint - "Phantom Column"

"Listapprovaldateby_x005b_jobtitl0" is the internal column name. I'm guessing for "List Approval Date by [ job title 2 ]". When you rename a column the the internal name remains the same.

Assuming the list has not exceeded thresholds, you should be able to edit or create a new view via "List Properties".

I know its not much but I hope this helps.