Hello. I'm trying to sort a List by an issue number, but I don't want the values to be read strictly as numbers with their decimal points. For instance, I want 4.10 to come after 4.5 because I want it to be read as "4.ten", but Lists reads it as "4.1".  I've tried to create the column as a number and as text and neither one works for sorting the way I need to. Any suggestions? 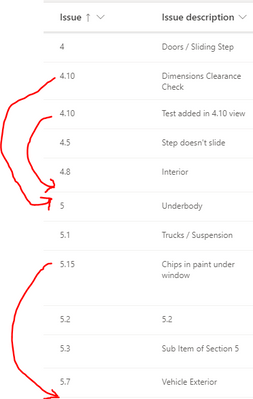 Hi, have you try to conver to string the numbers and then sort after this convert?
0 Likes
Reply

Hi. Would I have to use a Power Automate Flow to do this, or can the conversion be done in the Formula section when editing the column?
0 Likes
Reply