The 'modified' entries seem to be reliable but the 'read' entries are not.

Has anybody else experienced this? 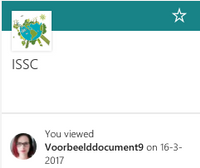 That's very strange - I haven't seen that before. I would suggest that you submit a service incident with Microsoft to have support begin investigating.

@Mijanou Bishoff please open a support ticket for this, since we'll need to get your logs to dig into this issue - not one that we can troubleshoot over the forum.

I will open a support ticket. Just wanted to know first if it was just us.

I'm experiencing the exact same issue. Any updates/results so far?

Following as I am experiencing this too...

I'm having this issue as well and I feel like I'm losing my mind. Has there been any resolution to this?

I found that everything that creates a thumbnail of the document will cause it to be logged as previewed. This includes SharePoint web app and ALL Microsoft phone apps.

Some of our users are reporting this same issue, and for example one of the users has a bunch of sites and files listed under the ’frequent sites’ which she has not explicitly visited/viewed and the time stamp for all is 23 hours ago. I mean it shows ”you viewed filename.xxx 23 hours ago” for all the files. Obviously this is very confusing for the users if they have not opened the files. What can cause this, did you get any response to your MS support case?
0 Likes
Reply

Hi @Mijanou Bishoff - I just noticed this in the SP mobile app this morning. It's showing I somehow accessed a bunch of files back in 2015 - I've only been at this company for 3 months and I've never heard of the sites or files.

Is there any fix for this yet? we are experiencing it also it has caused a few issues as some personal information is showing as viewed but hasn't been.
We have since moved anything sensitive to folders with special permissions but it has sown a seed of doubt in with the company that sensitive information isn't protected.

I am also seeing this strange behavior. Looking at sharepoint online details pane activity shows people editing documents who have never even seen them. I suspect this is caused by onedrive sync or other aps but would like an explination.

I just noticed the same thing this morning. I am not syncing the sites so I don't think it could be OneDrive causing the problem.

I changed my password concerned that I might have been hacked but all the signins in the past month have been from my ip address. Plus, it would be difficult for someone else to have both my password and phone for MFA.

I will create a ticket and report back if they have an answer. If anyone else gets an answer please report back as well. It would be better not to show the activity at all than to have it sometimes right and sometimes wrong.

@John Twohig if you hear back please update! I work for a company that handles controlled information. We have dual verification set up but this glitch makes people uneasy.

They are still working on it. Microsoft thinks it is Backupify, which we use to backup our SharePoint sites, but I don't see how that can be the case. Backupify says it isn't them so they will probably be going back and forth for a while.

I think we have established that the changes are coming from a Microsoft ip address which apparently would happen if whatever is changing things is using an API. So it is possible that whatever is doing it could be something at MS or some third party app. I am not aware of any third party app we are using other than Backupify but maybe something was set up years ago that I don't know about. Maybe it is an old Flow or Power BI report doing it.

I expect we will eventually get to the bottom of it but some things can be hard to troubleshoot.

Any explenation for this behaviour?
Got this issue still. Do not use any backup software or OneDrive sync on these sites.

I never did get an answer. Microsoft was convinced it is Backupify but it is pretty clear that it isn't. Since I am the only one at our company that noticed I stopped pushing for an answer.

Alright, thank you for taking your time to answer.  To bad that MS can figure it out, doesn't raise the users confidence in the platform.

Still seeing this issue as of 12/1/2021.  My recent activity shows that less than 1 hour ago, I opened a file that I have never seen before in a SharePoint site I wasn't aware existed at my company.  Was a ticket ever opened with Microsoft on this? @Mijanou Bishoff