in that form I have text box for "Vendor" and I want to replace that textbox with dropdown list, so when we add new item , for Vendor use have to select it from drop down list.

can anyone tell me steps that I need to follow. or link of article

Re: Replacing textbox to Dropdown in sharepoint form

@rautchetan27 if you go to List settings you can change the column type to a Choice column which will include all the entries that have been made so far. If your vendors are in a separate list then you've got a couple of options:

- The first is to create a Lookup column to the list of vendors on your site. That's the simplest way to do it.

- The second is to use a customised Power Apps form instead of the default SharePoint form and have a dropdown that looks up the list of vendors and saves the selected one back to the text column. In the example below I have a list with a column called Role which is a single line of text column:

For that column I want to lookup items from the Resource list: 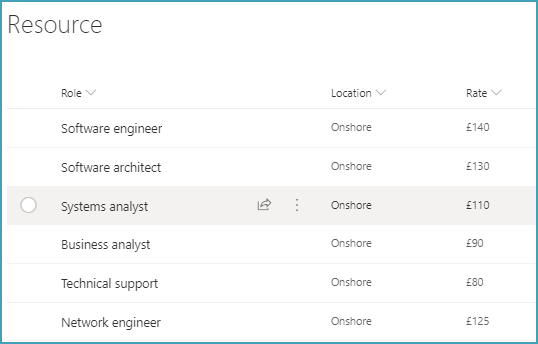 This is the customised form which lists all the roles from the Resource list. In this example I've added a filter as well for the type of role and am displaying the results in table, but you could just have the dropdown display the vendors.:

The selected item is saved back to the single line of text column.