Every file in one of our document libraries has the "Changes were made to this file. Publish to update changes." It is even doing it for PDFs that have been uploaded and there is no Publish option in the menu. This isn't happening in other document libraries. I'm still relatively new to SP so a few questions:

1. Does anyone know why this is happening and how to stop it?

2. If I can't stop it from happening, can I just tell people to ignore it?

3. When does someone actually need to publish changes? For example, if they edit a document someone shares with them, they don't have to publish the file for those edits to show up, correct?

@0123456789- We have exactly the same problem across a number of site collections, and have no resolution either at this stage: it is confusing our users. The wording in our system is slightly different:

Changes were made to this file. Republish to update changes.

We are having the same issue. Does anyone know how to turn off this "document publishing" feature?

@Rob Barker  I am posting the solution we discovered earlier so to help others as well.

The solution is to go to the Library Settings > Versioning Settings and make sure that the "Create major and minor (draft) versions" option is NOT selected.

You can select No versioning or Create major versions, but don't select the last one. If you do, you will be forced to publish documents. 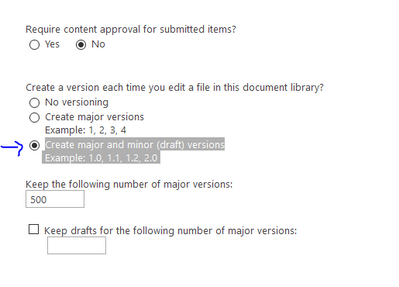 @tommy1973 Yes, there might be a way to get around this with the draft settings/content approval stuff.  Which would mean something like an approver can only publish.  Or perhaps through customized permission levels.  Which might risk breaking other things.

The setting is located in the "Draft item security" section of "Versioning settings" part of doc library settings.
2 Likes
Reply

I may be misunderstanding the issue but major/minor and publishing is not a 'problem' but is a design.  Sounds to me like you don't need minor versioning enabled.  Is minor versioning an actual business requirement in your environment?  If so, I'd have them validate why that is so because it sounds like it's not understood when and why minor versioning should be used.

1. Does anyone know why this is happening and how to stop it?

2. If I can't stop it from happening, can I just tell people to ignore it?

3. When does someone actually need to publish changes? For example, if they edit a document someone shares with them, they don't have to publish the file for those edits to show up, correct?

1. When a file is in a minor version it will say things like "Changes were made to this file. Publish to update changes" this until it is published to a major version

3. Technically, never.  Really only business requirements would dictate when a doc should be published.  Edits will show up for everyone unless you've specifically restricted this in the 'Draft Item Security Settings'

Thanks Scott.  We have a policy that all draft versions of document are Minor versions in SharePoint and once the documents are approved then they are published as a Major version in SharePoint; i.e. a whole number.

Is this not how SharePoint Major and Minor versioning in SharePoint is supposed to be used.

How are documents approved?

@louise1575 - Note tommy's screenshot and compare your library settings.  In fact, grab a full screenshot of this settings page (library settings > versioning) and post it.  But basically, sounds like that first setting is set to 'yes' which would mean only approver level permissions can publish.  There could be additional factors at play such as require checkout and required columns which might complicate when you actually see the publish button.

The screen grab of the settings is below.  One other thing is that if you publish using the "Publish" link at the top of the screen you don't get the dialogue box to add comments but you do if you publish via the document properties menu. 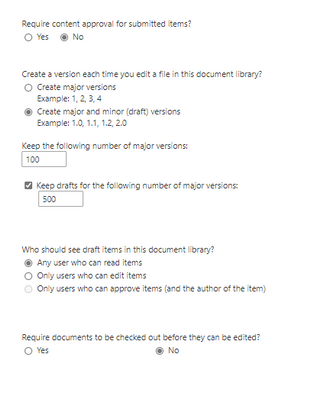 The screen grab of the settings is below.  One other thing is that if you publish using the "Publish" link at the top of the screen you don't get the dialogue box to add comments but you do if you publish via the document properties menu.

Thanks for sharing!  I was under the impression that you weren't seeing a publish button even though the system was prompting you to publish.  Sorry for the confusion there!

So everything that I'm seeing and hearing is 'normal' here for the settings that you're showing me, including the version comments not displaying on multiple file publishing.  This is all designed behavior as far as I can tell.

To recap with your settings (to the best of my knowledge):

@Scott Smith : as good as the conversation is here, it does not solve my problem, or the original poster's problem. We use minor versioning on files only because it allows for greater historical 'reach' and a better understanding of file changes, though in most libraries 'major' versions are only published when we get to the limit of minor versions. And all users have complete permissions, so it's not due to restrictions.

I'd call it a bug if it weren't for the fact that most users have worked out that they can ignore the (False) message, and carry on. Sadly, though, it diminishes the credibility of SharePoint for those users.

I appear to be possibly responding to two-three nuanced use cases on this single thread!   There appears to not actually be any 'technical' problems but rather complaints of MS language.  So I'll wrap up:

If a major version doesn't denote a 'milestone' in some fashion that is uniquely different from minor version, then I would disable minor versioning.  And major only is obviously the 'simpler' of the two for our beloved users - make a change, new version.  'Comments' in the info panel, while seemingly still buried for doc libraries, I think is an added benefit to help replace version history comments which are definitely buried.  I suspect these comments will be surfaced in more meaningful ways in the months ahead.

Minor versioning enabled is fine as we discussed except for the 'publish to update changes' is poorly written/misleading for this specific use case.  This is likely because I think the core intended use of minor versioning is more formalized as described below and then the language becomes spot on.  So you'd have to set expectations for the users.  Not to mention stay on top of it because the language could change (assuming you're using SPO).  Other than that quirky language, I think enabling minor versioning situation that you have works just fine.  I'd also go to user-voice and see if there are any similar complaints.

In my experience, I only ever recommended minor versioning to clients that wanted to use the major versions as 'milestones' or 'authoritative' in a more formalized setting; whereas minor versions are only drafts in the true sense of the word.  The editing team analyzes and/or makes their updates then submits for approval.  After managerial review, they click publish.  Perhaps they are the only ones that can approve.  From that perspective, the publishing language is in fact accurate when certain users can only see the major version and not the minor. This is one of my 'valid' business use cases for minor versioning.

Company Word templates available for anyone in the organization

SharePoint: How to export all the Publishing pages from a complete site collection to CSV Stats

SharePoint “Next steps” 📢 moves people to the latest collaboration experiences

Making tracks with 14 learning paths and 200 sessions at SPC19

Transform productivity by enable Microsoft 365 partner apps for your organization