I'm having an issue regarding Office 365 profile pictures not displaying on the Modern SharePoint People Web Part inside Office 365. We have this issue seen in two separate Office 365 tenants, both located in Europe. One tenant is Cloud only, so it's not connected via Azure AD Connect. The other tenant is using federated accounts and has both Azure AD Connect and ADFS implemented.

More people of you seen this issue? Do you know a workaround or do you know how to fix this? 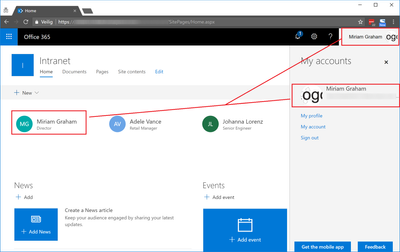 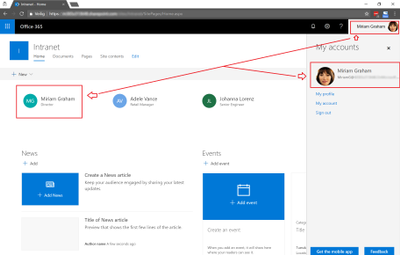 This thing is still a problem as today, even after 24 hours most pictures are not refreshed in SharePoint.

It seems to also depends on where the user did upload the picture.

"https://portal.office.com/userphoto" seems to trigger the sync to SharePoint... but changing in Delve or Outlook will not.

Also I found the quality of the pictures in "https://tenant-my.sharepoint.com/User Photos" to be really poor compared to other location.

We are experiencing the same issues.
I even found an example where my own profile picture is shown and not shown on the same page in multiple instances of the People web part. In this example I was recently added to the instance where my picture is shown, the other instance hasn’t changed.

The only working solution is to remove and re-add the persons from the web part and republish. But that’s not a workable solution for all our users.

We have opened a support ticket refering to this discussion.

@Wim Vandierendonck did you get any update from Microsoft?

The same issue applies to SharePoint Server 2019. The WebPart stores a copy of most user-information in the Source-Code (as XML/JSON). After editing a page and save it again, the source-code gets modified/corrupted, even when no change was made to the People WebPart.

I’ve put in support ticket and get no where with this. So I usually just upload the pictures manually to their user profile in classic admin. This will make it instantly appear.
0 Likes
Reply
Highlighted

@Harold van de Kamp 18 months later and this "feature" is still causing problems for our company - users or admin add profile photos, which appear everywhere in Office 365 *EXCEPT* SharePoint. My current technical support provided this list of actions report back on - see below. Personally, I just want this to work - if the profile image is showing in Office 365, Outlook, Outlook Online, Teams and Delve - then it should just show up in SharePoint and not require any interventions by users or admin.

The current work-around solution I am trying is to manually add the photo in the SharePoint Admin classic edit user profiles - since this shows the photos in SharePoint almost right away... most of the time.   The reason I need to push this now is that we are launching our new SharePoint Intranet, and it just looks bad when profile photos are missing.

• Check in Exchange Online to see if the user’s picture, click ‘shows up there. To do this Outlook’ on the navigation. Then, next to the user’s name click the drop-down arrow. Under the default configuration, the user’s picture should appear here.
• In SharePoint, have the user click ‘change your photo’ followed by cancel and refresh the browser. This forces a picture sync.
• Try in-private browsing or a different browser.
• Ensure users have permissions to edit the ‘PictureURL’ property in their profile. The property must be user editable. Browse to tenant administration > User Profiles > Manage User Properties > edit the ‘Picture’ property. Ensure ‘Edit Settings’ is set to ‘Allow users to edit values for this property’.
• Take a fiddler trace of an in-private browsing session browsing to ‘Newsfeed’ and clicking ‘change your photo’. *Fiddler steps are Mentioned in Email Attachment*
• Use the URL https://outlook.office365.com/EWS/Exchange.asmx/s/GetUserPhoto?email=user@domain.onmicrosoft.com&siz... and just replace the email address to customer’s mail address and check if image is rendered or not. (access URL with affected user account login)
• User must be rendering his/her own large thumbnail picture either using userphoto.aspx?size=L or rendering the actual file user_tenant_onmicrosoft_com_Lthumb.jpg
o a. In case of the file user_domain_onmicrosoft_com_Lthumb.jpg, it must exist in the User Photos library in the correct Profile pictures folder according to the web's language, there is a URL prefix check to ensure that the picture is in the right location and exists.
• User's SMTP claim must have an EXO license associated and image uploaded or DirSynced.
• The Mysite host (https://domain-my.sharepoint.com/) must have enough storage to save the images (quota settings).
• Browse to https://domain-my.sharepoint.com/user%20Photos/Profile%20Pictures >> Look for affected user and take a screenshot.

We have the same issue. Some apps display the current picture, some display the old, and sharepoint display new, old, and blank depending on hwat kind of page you are on. We have instructed employees to update their photos, only to discover nothing syncs and half the photos are blank when they uploaded them over a week ago. Any help is appreciated, we are totally confused how this is supposed to work. We dont have a User Photos directory on our tenant that we can locate.

I've tried to upload pictures to the different Apps and then see which apps are changing the picture accordingly. My findings are that all Apps change the pic except Delve and SharePoint.

I changed my profile picture today (which I had there already for months) through Outlook OWA. This changed my picture in all Apps, including Delve and SharePoint.

But from that point on, wherever I tried to upload the picture, it would not change in Delve nor in SP.

When changed in Delve it works for like 10-20 sec. after that it changes back to the original one.

I also noticed that some apps have Delete options for the picture. this also worked for all Apps except again Delve and SP.

Delve itself doesn't have a delete option for the picture. Only upload a new one is possible. Could this be adding to the issue?

I find this strange that MS is not focusing on this issue at all.

PS: I also saw that when deleting the pic in MS Teams (desktop app) then it appears to be empty with showing your own initials with grey background, but its not really an empty profile picture, when looking to other apps. Its that same grey background with initials. When deleting the pic through other apps, then you really have an empty profile picture with a visual of an outlined person or your initials on a black background.

In SharePoint 2019 Dezember CU this was finally fixed

Hi @Benjamin Gemperle, thanks for the info. This appears to be the case for SP Server, not for SP Online, is that correct? We use SP Online.

After some research I found that there is a delay of up to 24 hours before changes in Delve and SP are seen. So far it looks promising.

@Jonathan HerschelI really appreciate if you help me with the command or the work around for the same.

not sure if it holds true over half year later, but the workaround was to send this link to users (the SharePoint browsing page):

then wait until the next day.  Their photo would show up (most of the time)

@Jonathan Herschel this issue is back for us and we created a ticket with Microsoft support. It's clearly a bug that hasn't been fixed years later. Microsoft can synchronize the pictures with just a couple of clicks. They either fix the bug or they just fix it when we reach out to them. I'm really disappointed that this still hasn't been addressed and that it takes so much time for me to get them to fix it after creating a ticket.