How do you do this?

I don't have this: 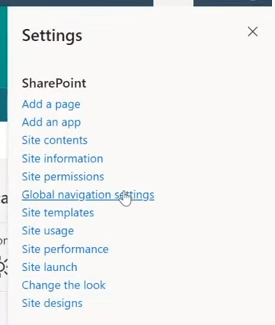 I've set my HomeSite with Set, checked with Get, created a new Comm site from scratch, given hours of propagation time... What am I missing?

@oiverson You're not doing anything wrong. It's just not available yet. I think the timeline from this announcement was that global navigation is supposed to be rolling out by the end of 2020. I haven't heard anything more specific yet, so I'm assuming late December (if it doesn't get delayed later than that).

@Ryan Robinson Great, thank you for the sanity check - I keep seeing references to it here and there throughout their documentation, then I check the Microsoft Roadmap page for any mention of something like "global navigation" and there's just nothing.

Frustratingly, I've chosen the same time period to dive into SPO as Microsoft chose to do (what appears to me to be) some significant overhauls - seems their tech docs are changing weekly!

@oiverson - ID for the feature in the Roadmap was 66584, hopefully it doesn't change from here. https://www.microsoft.com/en-us/microsoft-365/roadmap?filters=In%20development&searchterms=66584

@Timothy Balk ah ha - I wasn't even thinking of searching for the Home Site App.  Thanks!

@oiverson SharePoint is always changing (and Teams even faster). If it's not your full-time job, it's a lot to keep up with and you may need to triage ignoring some things that aren't as important in your context.

The big new features typically get announced the most at conferences in the spring and fall, then those features stagger out over the next 6 months. The Ignite conference was late September, so that was the last big round of news including global navigation that you've jumped into the middle of. My strategy is usually to look up the highlights from those conferences, note which ones matter in my work, and keep an eye out for those appearing in my Message Centre once they're close to launch while allowing myself to skim over the rest.