An update for Managed Metadata was recently released and I don't know how many folks this negatively effected, but in our case this has a fairly significant and negative impact. We're using managed metadata to categorize documentation for our companies and their departments. We're using a path of terms, starting with department, drilling down to functional areas of that department, and drilling to a further breakdown of those functional areas.

Before updating, when filtering this library by the metadata the filter pane showed the metadata in a tree view only. This works really nice when using full term paths. Now, by default the managed metadata is shown in a list view, which is pretty ugly for term paths (long, cluttered). There is no way to change this default, and in order to get back to the tree view it requires our users to select "See All", and in the window that pops up they can then select tree view. Multiple steps were added to their experience, and the filter pane at first glance looks rather ugly / broken now. See the pictures below.

I'm not against the progression of the update necessarily, however in this update we, in our case, have lost functionality rather than gained functionality. Please give us an option to choose a default view by column for the filtering pane display. 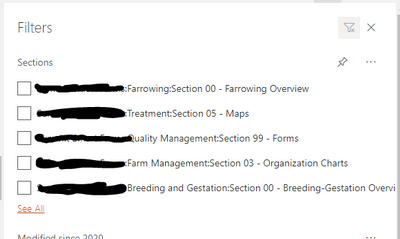 Below is the tree view option after hitting see all, which as you can see works much better with multi-level term paths. There is much more information presented here, as well as clarity to the user on what they'd like to filter. Not to mention they can now filter at a parent term level, not just the final child in the term path. 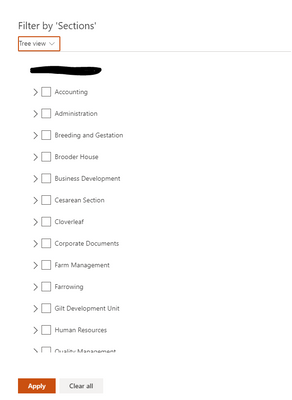 Re: Filtering Library by Managed Metadata Issues with New Update

This is a very similar post (here) for folks interested in the problem - though I don't know if this post necessarily is applying to the filter pane.