See the screenshot for the setup. The column definition is in the background and a snip of the entry form is in the foreground.  Note that there is no line break after the second option "closed" in the column setup. The radio button shows an empty choice above "active". Why? There is no setting to account for that.

Is this a bug? Or how can the empty option be turned off? 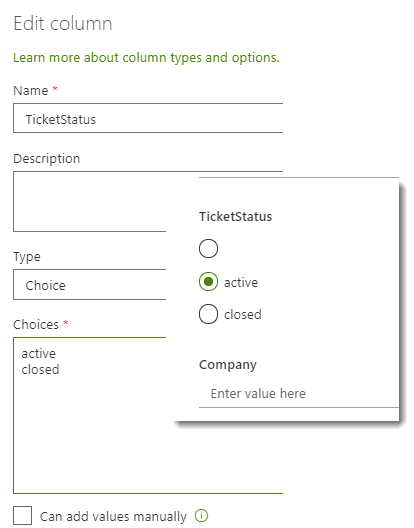 I've been trying to get an official word from Microsoft on this, but it's something effecting everyone. I personal think it's an attempt at allowing people to take choice columns and set them to blank values that I think could be done better, but it could be a bug as well. Anyway, still waiting for a response. Most people are switching radio's to drop downs as it looks better that way.

@Chris Webb Thanks. If this is intentional, then it has definitely not been thought trough properly.  There are plenty of scenarios where an empty option is not desired, and if it is allowed, it could be added as choice worded "empty".

Agree, at minimum should say empty or something. I think it should be the way it used to be, but on edit forms a "remove" value link of some kind would be better, but one of the other.
1 Like
Reply