I am setting up a new instance of SharePoint Subscription Edition.  I am having issues with getting past the the Configuration Wizard connection to the database.  I have SQL Server 2019 on Server 2019, version 15.0.2000.5 (64 bit) and am getting the error message:

According to this: https://docs.microsoft.com/en-us/sharepoint/install/software-requirements-for-database-servers-for-s... 150 is a supported version.  It is 64 bit: 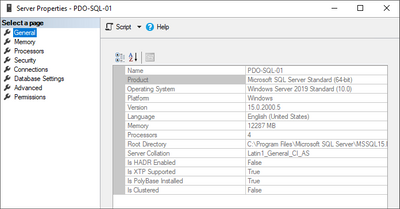 and I have set "Max Degree of Parallelism" to 1.

Any ideas what I should be looking for to resolve this?

Hi @paulororke, note the additional requirement in that article about needing to at least be on Cumulative Update 5 (CU5) of SQL Server 2019.  Once you update SQL Server 2019 to CU5 or later, you should be able to proceed.

Regards Windows Updates, the Server was fully patched before attempting this. I downloaded that CU5 anyway and tried running it but SQL Server reports that it is older than what is already installed: 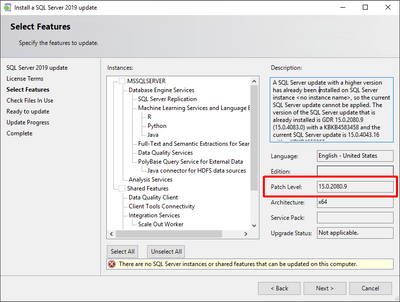 Yet it reports an older "version".

It seems to be looking to the wrong version number.  I am not at all sure where to take this.

Thanks for your help thus far.

Hi @paulororke, thanks for the additional updates.  SharePoint is looking at the version number reported by the ProductVersion server property, which is what's displayed in the "Version" field of the server properties page for that server instance.  You can also get this value by running this SQL statement: SELECT SERVERPROPERTY('ProductVersion')

What you're seeing is interesting and potentially a side effect of having both GDR updates (which only contains security fixes) and CU updates (which contains security fixes but also includes bug fixes and feature improvements) for SQL Server installed.  This may be because this particular GDR patch was released after CU5.  The solution may be to install a CU patch that was released after that GDR patch.  Per Latest updates for SQL Server - SQL Server | Microsoft Docs, the latest CU is CU15 (KB5008996 - Cumulative Update 15 for SQL Server 2019).  Give CU15 a try and let us know if you're still having issues.

You nailed it. Installing CU15 directly allowed the installation to proceed.

Thanks very much for this.