Hi, Tad Brockway here. I am a Product Unit Manager on the Windows Server team.  My team is focused on rich media remoting technologies for the new Remote Desktop Services (RDS) in Windows Server which we announced last week at ITForum EMEA in Barcelona. I just returned from WinHEC 2008 in Los Angeles where we showed a demo of some of the new rich media capabilities of RDS as well as a technology preview of what the Calista team has been working on since the company was acquired by Microsoft earlier this year. For those of you that have not heard of Calista before – Calista developed a set of unique GPU virtualization technologies designed to significantly enhance the end-user experience of 3D and multimedia for server-hosted virtual desktops (also often referred to as virtual desktop infrastructure or VDI).

So, before I talk about the demos and presentation at WinHEC, let me quickly summarize why rich media remoting is important to our customers. In many IT environments today, customers are looking to apply virtualization technologies in new ways to increase data security and operational flexibility for desktops and applications by centralizing them in the data center, and enabling users to remotely connect to them via the Remote Desktop Protocol (RDP). The increased adoption of centralized desktops and apps, coupled with the more prevalent use of 3D graphics and rich multimedia content are driving new requirements to enhance the end user experience in remote desktop and application scenarios.

Both RDS in Windows Server 2008 R2 and eventually Calista (when it ships at a yet to be determined point in the future) will help us address these customer needs.

The second demo showed two virtual machines along with early Calista bits running on Hyper-V server (preview code), showing a variety of rich graphics applications - DirectX9, Aero Glass, 3D Flip, Adobe Flash, and Silverlight – as part of a Windows 7 desktop over RDP. And finally, as a variation of the second demo, we showed a complete, Calista-enabled hardware-to-hardware solution involving a prototype thin client connected to one of the VMs playing full-motion videos in Windows Media Player. 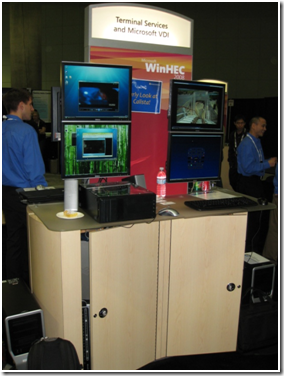 RDS and Calista demos at the Microsoft Booth at WinHEC 2008

Both the exhibit and the session breakout that Nelly Porter and I held on Friday afternoon were meant to highlight Microsoft’s commitment to RDP and to a better Windows remoting experience for our customers. Based on the conversations our team had with a number of ISVs and IHVs at WinHEC, our partners seemed excited to hear how we plan to enable, in Windows Server 2008 R2 and beyond, the remoting of a rich user experience with a powerful set of platform capabilities, including support for both primitive and bitmap remoting, support for hardware-assisted solutions, and support for rich (‘thick’) and thin clients.

I hope you are as excited as I am about the progress our engineering teams have made and the prospects of these new platform features. Post some questions in the comments section - I'm interested to hear what you think and to answer questions.