Turn on suggestions
Auto-suggest helps you quickly narrow down your search results by suggesting possible matches as you type.
Showing results for
Show  only  | Search instead for
Did you mean:
RemoteApp for Hyper-V
By

With the advent of Windows 7, some enterprise customers were facing application compatibility issues with line-of-business applications that were specifically written for Windows XP and would not work on Windows 7.

One obvious way to resolve this issue is to run those incompatible applications in Windows XP Mode, a new feature that is available in certain Windows 7 SKUs and which simplifies migration to the new OS by allowing legacy XP applications to seamlessly run in their own context within a Windows 7 environment. Windows XP mode has specific hardware, OS and memory requirements . While this solution works well on newer machines with hardware virtualization support, the hardware requirements for XP mode might be prohibitive for some older PCs.

RemoteApp for Hyper-V allows users to remotely access Windows XP applications from their Windows 7 desktop with no additional hardware requirements.

Here are some examples of applications that will benefit from this feature:

To use this feature, a user connects remotely from a client computer to the VM-hosted application. To host the applications, an administrator sets up a virtual machine with a guest OS on a Hyper-V server hosting the virtual machine.

There are two ways in which RemoteApp for Hyper-V can be deployed. The first way is the stand-alone scenario, in which all the administrator needs to do is set up a Hyper-V server with virtual machines running a client OS (for example, Windows XP SP3). The administrator would then set up the application and create RDP files that launch this application. A user can connect to the application via a simple Remote Desktop connection using the RDP file.

Here’s how this setup would look: 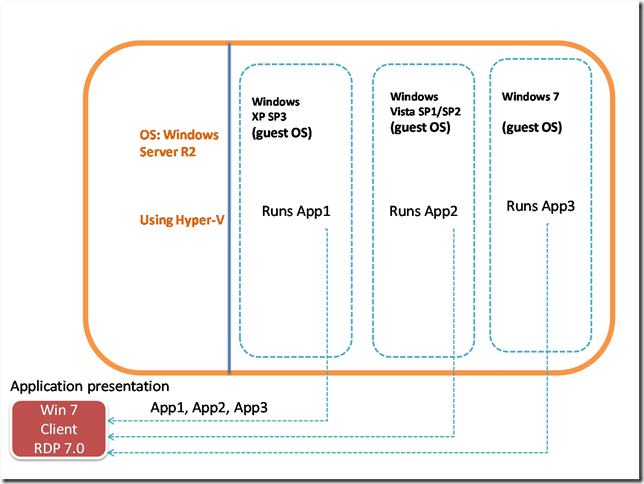 While this is a simple setup that an administrator can use to pilot the RemoteApp for Hyper-V, it offers no extra efficiency or ability to load balance. One serious drawback of this method is that since only one user can connect to an application at a time, one user connecting to multiple virtual machines effectively blocks out other users.

To get around this problem, the recommended way to install RemoteApp for Hyper-V is over a complete VDI farm or personal virtual desktop setup, including setting up the RD Connection Broker role. An administrator would still need to perform the same manual steps of setting up the application and creating an RDP file, but there are significant advantages to going through the RD Connection Broker. An obvious one is load balancing. In addition, there is increased efficiency, simply because when a user is connected to a virtual machine, all applications launched by that user are redirected to the same virtual machine. Only one user can connect to applications running on a particular virtual machine at a time.

One single user cannot block out an entire farm by holding onto different virtual machines on it at the same time. Until a user’s virtual machine is terminated, redirection is always to the same VM. RD Connection Broker ensures that a user connected to a VM stays connected until logged out.

Here’s how the second setup scenario described above would look (running from a Windows XP SP3 farm, for instance): 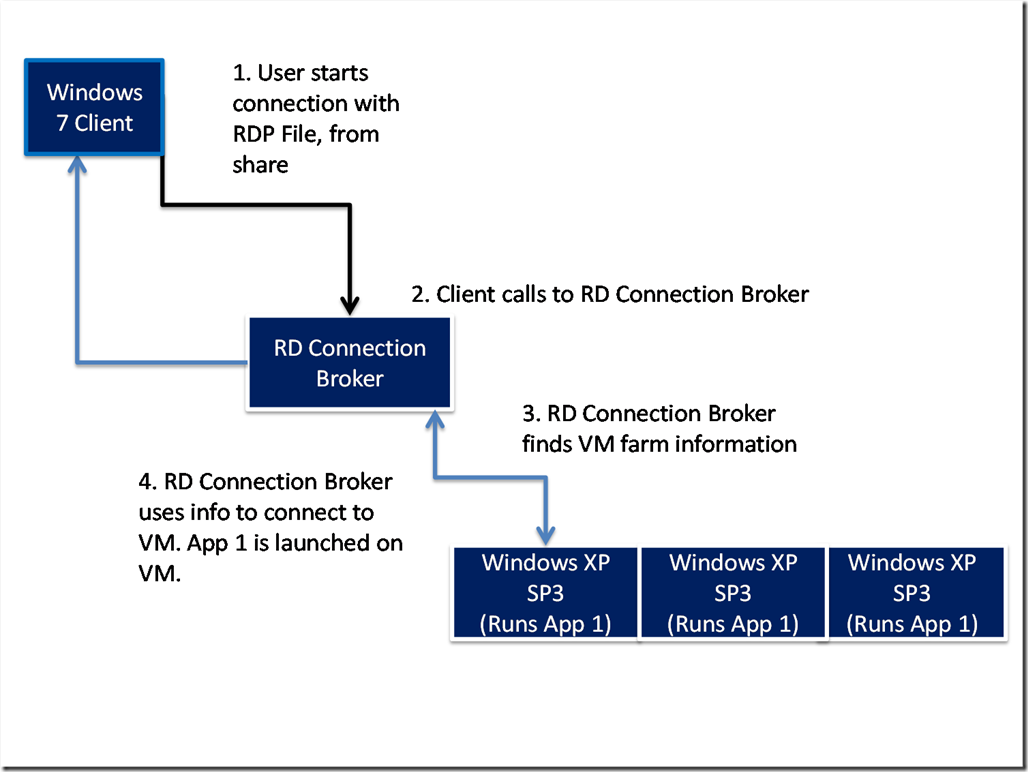 RemoteApp for Hyper-V is a basic but powerful platform capability which was designed with advanced administrators in mind who are willing to do the manual configuration steps to enable an environment that includes remote access to VM-hosted applications. It serves also as an extensibility point for our RDS partner ecosystem who may want to take advantage of this infrastructure capability and provide additional value-add to RDS customers by streamlining the configuration and expanding the usability and manageability of it. For example, with additional code, it is possible to integrate the RDP files with Remote Desktop Web Access.

Update package for Windows Vista SP1 or above: