My name is David Bélanger, and I work in the Remote Desktop team. Today marks the release of the last update to the Microsoft Remote Desktop Preview app for Windows Phone 8.1 for 2014. We are still hard at work on enabling support for Remote Desktop Gateway and Remote Resources (RemoteApp and Desktop Connections), but as we are still putting the final touches on these features, we are delaying their release to early next year.

Today’s release includes some improvements to Azure RemoteApp , a new Azure service available from Microsoft. For details on the addition of this new service to the Windows Phone app, check out last month’s release blog .

Continue voting for the features you’d like to see in future versions of the app on our feature requests site as it will help us ensure we build the right functionality into the app. A link to the feedback site is also available directly inside the app from the about page.

Pinning apps to the Start Screen 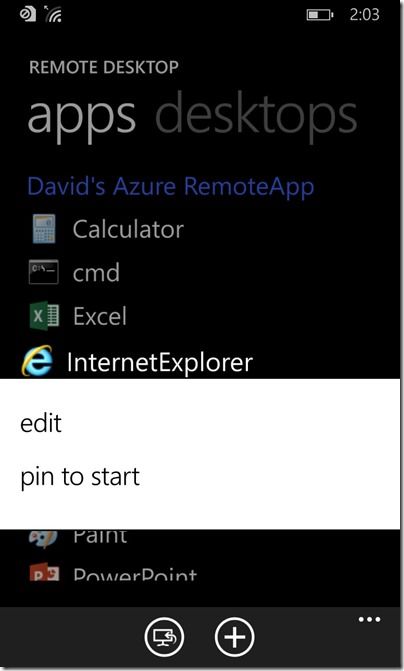 Once an app has been pinned, it will be available on your Start Screen to be launched from a single tap. We support creating Small and Medium sized tiles. Apps can also be grouped together into folders now available on Windows Phone. This feature is in addition to the ability to pin desktops connections which was already available. 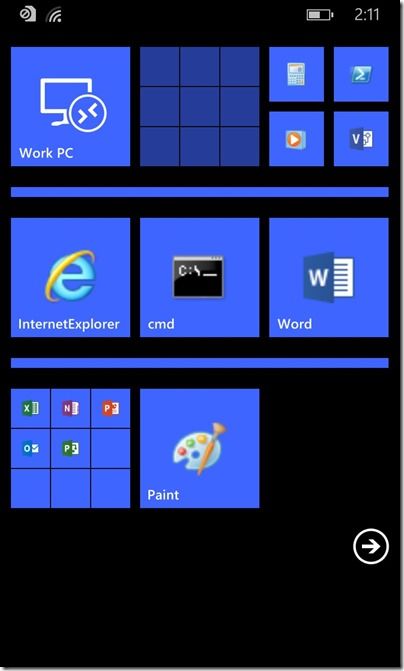 To keep your list of apps up to date, we’ve enabled automatic syncing to happen while you use the app. If the list of apps available to you has changed (for example when your IT admin publishes new apps), then the list of apps on the apps pivot will be updated to reflect the changes which could include adding or removing entries.

Also, if you are sent new invitations that haven’t been accepted on one of your devices, you will receive a notification letting you access the invitations page so you can decide if you would like to access the new apps (make sure you trust the invitation sender). I encourage you to download the Remote Desktop Preview app from the Windows Phone store and try out the new features.