Turn on suggestions
Auto-suggest helps you quickly narrow down your search results by suggesting possible matches as you type.
Showing results for
Show  only  | Search instead for
Did you mean:
How to create Prestaged Media for WES 7.1, PosReady7 and ThinPC in ConfigMgr 2007 R3
By

How to create Prestaged Media for WES 7.1, PosReady7 and ThinPC in ConfigMgr 2007 R3

This blog post introduces how to create prestaged media for Windows Embedded Standard 7.1, PosReady7 and ThinPC with ConfigMgr 2007 R3.

First, you need to setup a reference machine that runs the operating system you plan to deploy. Then, you need to capture the reference machine into an image file. Finally, create a prestaged media based on that image file in create prestaged media wizard. You can either do the first step by using a task sequence or manually. With either method, it is important to create a single partition disk layout for the reference operating system (OS).

If the following symptom is seen in CreateTsMedia.log when creating a prestaged media for WES 7.1, PosReady7 or ThinPC, it is likely that the reference image captured doesn’t have a single partition disk layout:

When manually installing WES 7.1, PosReady7 and ThinPC setup wizard will create additional partitions for system files automatically, as seen in the following screen capture. But you may open the command shell with Shift+F10, and run the following diskpart commands to partition the disk yourself. The following diskpart command will create a single NTFS partition on disk x. If you do not, the installation process might create a separate partition for boot system files automatically.

After the partition is successfully created, exit the command shell and continue with the installation of WES 7.1, PosReady7, or ThinPC. 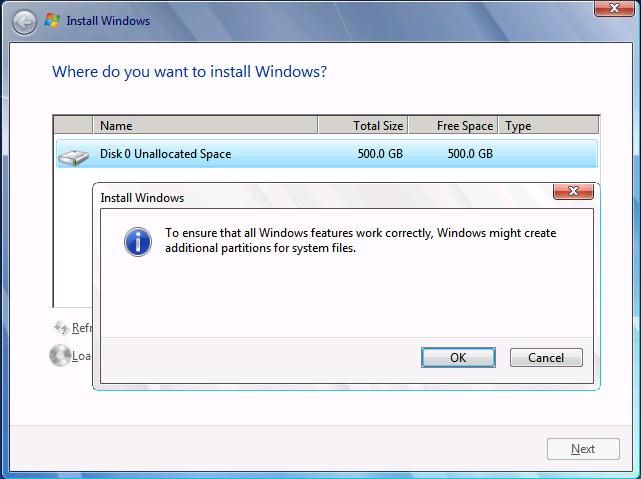 Once the operating system setup is finished, use a task sequence to capture the image or perform a manual capture. After the image capture completes, create an operation system image package based on that image in site server, and use the task sequence media wizard to create a prestaged media.