Turn on suggestions
Auto-suggest helps you quickly narrow down your search results by suggesting possible matches as you type.
Showing results for
Show  only  | Search instead for
Did you mean:
Duplicated Configuration Items and Configuration Baselines Revert to Original Name
By

Torsten had created the original configuration data on a test network, exported it and imported it to his main Configuration Manager hierarchy.  The imported configuration items and baselines imported fine, and they were locked, because they weren't created at the site.  He wanted the ability to change them if necessary, so he did the following:

Without further intervention, the duplicated configuration baseline will continue to use the reverted name.  For example: "Original Baseline" will be displayed in the Configurations tab on the client when it is downloaded for compliance evaluation, and the reports will display results for "Original Baseline" instead of "New Baseline".

Thanks to Richard Xia's investigation from the product group, he pointed out a key factor that I missed at step 2 above - probably because I was so focused on editing my configuration baseline for step 3.  I should have paid more attention to the Properties pane beneath the results pane.  The properties for New Baseline actually display the old name of Original Baseline , as shown in the following picture: 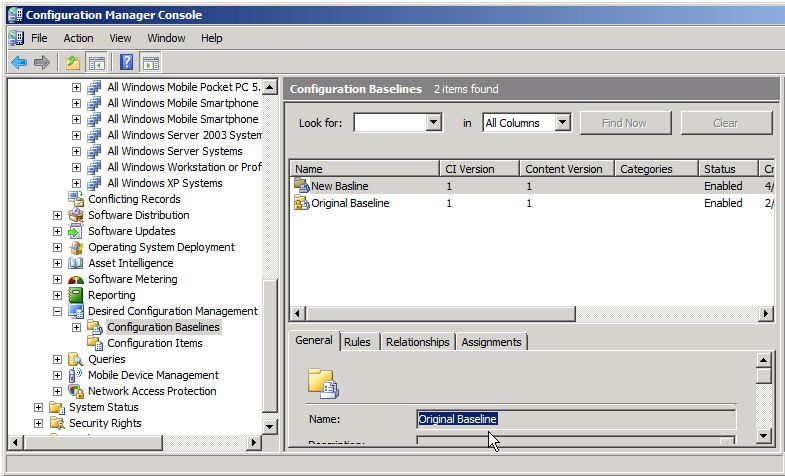 When I saw this mismatch in the console, that's when I remembered .... I had already documented this as a known troubleshooting issue - in Problems Editing Configuration Data in the Configuration Manager Console :

When you create a duplicate configuration item, it might display the original name rather than the new name in the Configuration Manager console in the following circumstances:

I think what threw me off track, was that the problem we investigated was for a configuration baseline, rather than a configuration item, and I didn't associate it immediately with a display issue. In Torsten's case, he didn't notice the console display disparity but discovered it because he couldn't find the configuration baseline in the reports.  This was when I realized this would be good to blog, because you might come across this in different ways - as missing report data, or as missing compliance results from clients, or as a console display problem.

I'll update the troubleshooting entry in the documentation so that it refers to configuration baselines as well as configuration items, and make it clearer that it's not just a display problem.

Fortunately, once you realize what's happening, it's a really easy fix.

Solution to the name reverting behavior:

After the initial duplication and naming of the configuration baseline, re-type your choice of name when you edit it (step 3 above).  This time it will "stick".