There is no shortage of excitement about Windows 10. A recent survey conducted by Spiceworks , an independent IT community found that 74% of businesses said they plan to upgrade to Windows 10 by 2017. In my 12+ years at Microsoft, there was more anticipation for Windows 10 than any previous release. This leads to an important question for IT departments all over the world: What is the simplest way to deploy Windows 10 to my users? To be totally transparent, I really don’t think we in the ConfigMgr team gave you the right tools to easily deploy Windows 8. One problem in particular was that, in order to deploy Windows 8, organizations had to first upgrade to System Center 2012 Configuration Manager in order to perform an OS upgrade (since ConfigMgr 2007 did not provide this functionality). What a pain!  I heard from many of you about the challenges this caused – often in no uncertain terms. I’m happy to say that we are in a much different place with Windows 10. In May, we released Service Packs for ConfigMgr 2012 and ConfigMgr 2012 R2 to ensure that OS deployment to Windows 10 is fully supported. ConfigMgr 2012 SP2 and ConfigMgr 2012 R2 SP1 are fully compatible with Windows 10 – you do not have to upgrade to a new ConfigMgr to deploy Windows 10! Over the past 2 years, my team has worked closely with the Windows team through every part of the planning and development process. Right now , ConfigMgr is fine-tuned to deploy and manage Windows 10 on Day 1 of the Windows 10 release. You may remember at Ignite we announced that in the Fall we will also release the next version of ConfigMgr in which we will light-up many of the new features in Windows 10. This upgrade to the next version of ConfigMgr will be “service pack”-like in how it will be deployed. We are doing our very best to keep it simple . The next few posts in this series will cover the management of Windows 10 in great detail; today I’m going to focus on deployment . ConfigMgr has a long and proven track record when it comes to deploying the Windows OS – ConfigMgr manages >70% of PCs worldwide, 99% of organizations with 10k users already use it, and 62% of organizations will use it to upgrade to Windows 10. OS Deployment across an enterprise will, in most cases, continue to be an on-premises workload performed by ConfigMgr. We have done hundreds of thousands of hours of work to make the deployment of Windows 10 via ConfigMgr simpler and more efficient than ever.

The Best Way to Deploy

We have made huge investments to support upgrades to Windows 10 from Windows 7 & 8. We have been laser focused on simplifying the upgrade process. Based on countless discussions with our customers, we know that one of the biggest concerns with any upgrade is the potential compatibility issues. I am happy to report that, throughout our work with Windows 10, we have built an exceedingly high level of compatibility with ConfigMgr. ConfigMgr works proactively under the hood of Windows, and, as my team carefully examines any kinds of compatibility issues, I have been amazed at how few compatibility issues there have been compared to previous releases. This is one of the reasons that we are able to support Windows 10 on previous releases of ConfigMgr. We’ve also been making improvements and enhancements to the OS Deployment features of the next release of ConfigMgr that makes upgrading your current OS to Windows 10 better and easier than a wipe and load. The next release of ConfigMgr makes use of the many improvements we’ve made in core Windows to make upgrading easier, including: The well-known “OS Deployment” ConfigMgr feature has also been turbo-charged with new enhancements to support the Windows 10 upgrade. We’ve created a new task sequence option that allows you to do some pretty amazing things: 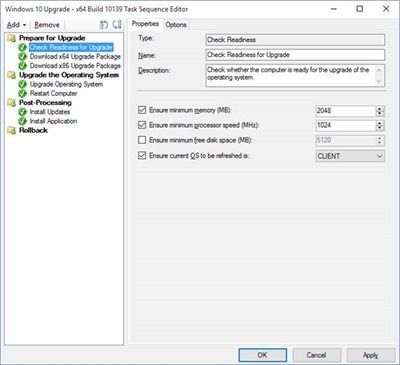 This is what the ConfigMgr in-console monitoring for MSIT’s Windows 10 upgrade deployment looks like:

Here’s what the Windows 10 Task Sequence Editor looks like: 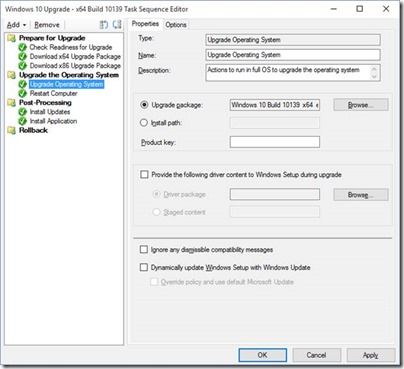 For those instances when refreshes are necessary, all of our focus on upgrading hasn’t diminished our refresh (aka wipe and load) support. The refresh functionality in ConfigMgr is a great way to make fundamental changes, like:

We’ve worked together with the Windows team to identify common deployment barriers very early in the planning process, and Windows 10 and ConfigMgr were architected and developed to integrate and avoid these traditional pitfalls.

But let’s get specific: Here are 4 common (and difficult) OS deployment barriers that are solved by ConfigMgr: