Turn on suggestions
Auto-suggest helps you quickly narrow down your search results by suggesting possible matches as you type.
Showing results for
Show  only  | Search instead for
Did you mean:
ConfigMgr Current Branch Surpasses 50M Managed Devices!
By

First published on CloudBlogs on Nov 18, 2016
One of the things that inspires engineers every day is the desire to see other people using and benefitting from the things you’ve worked so hard to build.  I think this is a common feeling for anyone who builds and creates.  For me, this is one of the biggest reasons I love working at Microsoft:  The things we build are used at massive scale all over the world – and they help people and organizations to achieve more . Earlier this morning, we reached a scale milestone that is simply amazing:

We reached this milestone in less than 1 year after its release .  Right now, more than 25,000 unique customers have upgraded to ConfigMgr Current Branch and are taking advantage of the rapid cadence and rapid innovations we’re delivering on a regular basis. This is the fastest upgrade to a new version of ConfigMgr in its history .  You can learn more about Current Branch in this video .

This week also includes the launch of ConfigMgr 1610 !  Wow!

You can read all about 1610 here . Days like this one are an opportunity to celebrate and, more importantly, express gratitude to our customers who have embraced this vision of ConfigMgr-as-a-Service.  We take very seriously the trust our customers put in us as they rapidly upgrade to ConfigMgr Current Branch multiple times per year. This is also a unique time of year in Redmond because last week we hosted our annual MVP Summit.  This event brings together MVPs from all over the world, and the ConfigMgr/Intune community is one of the very strongest groups that attend.  The ConfigMgr/Intune MVP’s are both our best advocates, as well as our greatest critics, and I love the direct and unfiltered feedback they provide. During the MVP Summit, I asked a number of our MVP’s to share why they think customers have been so eager to embrace each new release of ConfigMgr, as well as what benefits they have witnessed.

Here’s what they said:

The big points that I heard from each MVP I met with was that staying current with ConfigMgr meant that they always had the newest capabilities, they could take advantage of updates to Windows 10, iOS and Android, and they never had to go searching for updates because they were notified right in the console – and all they needed was a right-click to be deployed. I love the number of times in that video we hear how simple it is to deploy the updated builds.  Time and time again I had MVP’s tell me, “It is just so simple,” or “right click and you are done.”  This is a big win for our customers.

To really emphasize the magnitude of what ConfigMgr has done, here are a couple particularly fascinating data points we see in the telemetry.

This chart is a view of all 50M devices and which version of Current Branch they have deployed: 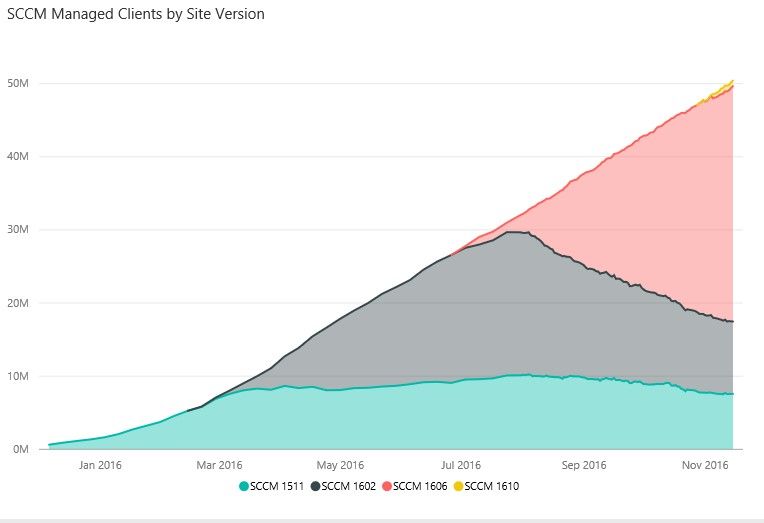 Notice that more than 66% of the clients are on 1606+ !  Thank you for sticking with us! To answer one obvious question about this graph:  The reason the number of customers using 1511 hasn’t been declining is because, until recently, customers could only upgrade to 1511 from 2012 and 2012 R2. As a result, some customers were updating to 1602 or 1606, and then there were also new customers upgrading to 1511 from older releases. This next graph is a really cool view of some of the largest customers who have upgraded:

The vertical axis is the total number of devices each customer is managing.  The green bars are customers on 1606.  The yellow are customers on 1610 – did I mention this is available now !? As an FYI:  Microsoft internal is the second bar from the left – we manage more than 360k PC’s through a single ConfigMgr hierarchy.  I’m very proud to say that my org is the operational team that runs the internal deployment and there is no better learning environment than that!  We also manage 100,000 mobile devices through the ConfigMgr/Intune hybrid model! If you have asked yourself the question, “Well, is ConfigMgr Current Branch ready for prime time and ready for me to upgrade?”  The answer is “ HECK YES !” One of the top priorities we’re hearing from nearly every customer is their intent to adopt Windows 10.  Based on hundreds of these conversations and the telemetry we’re seeing in ConfigMgr, here’s what we know: When I joined Microsoft in 2003 and took over the SMS project, we had a 3-year engineering cycle.  That meant that it took us 3 years to release each new version.  I remember sitting in my first meeting with the team to review the plan for how we’d define, build, and deliver what became ConfigMgr 2007.  Once we had agreed on the pillars of the release and how we’d execute, I changed the course of the meeting a bit – I wanted to know why it took 3 years to get it done .  There was never a satisfying answer. Fast forward to today .  Since November 2015, the ConfigMgr team has done monthly preview releases, as well as major releases that all customers move to (e.g. 1511, 1602, 1606).  And now 1610 is available right now ! What the ConfigMgr team has accomplished is remarkable.

To really put their achievement in perspective, here are some of the values you get with the “SaaS-ification” of ConfigMgr:

But rather than just reading about all of this – start using Current Branch yourself! You can download and upgrade to 1606 here or go to your console and get the 1610 update ! If you have any questions, here’s a guide for how to upgrade.  And, of course, once you’re up and running, share lots of feedback .
0 Likes
Like