Turn on suggestions
Auto-suggest helps you quickly narrow down your search results by suggesting possible matches as you type.
Showing results for
Show  only  | Search instead for
Did you mean:
Check Out What ConfigMgr Customers were Doing During the 2016 Holiday Break
By

First published on CloudBlogs on Jan 06, 2017
Happy New Year!!!  I hope all of you had the opportunity to get some time to relax and spend time with your loved ones. Earlier this week, as we all came back from a little time off, the first thing everyone on my team did was dig into the telemetry and signal that had come in over the last two weeks.  It didn’t take much digging to see something incredible . What we found was an answer to a question we had posed before everyone left for break: How many upgrades will there be during the last two weeks of the year? This question is significant because we know that many organizations lock down significant changes at the end of the year, and we also know that there are many organizations that use this time when the offices slow down to perform upgrades and make changes.

All of these factors had us wondering what would happen with the upgrades to ConfigMgr Current Branch.

Below is a screenshot of a chart showing the 28k+ unique organizations who have upgraded to Current Branch.  Take a look at the chart and then let’s dig into what we learned from it. 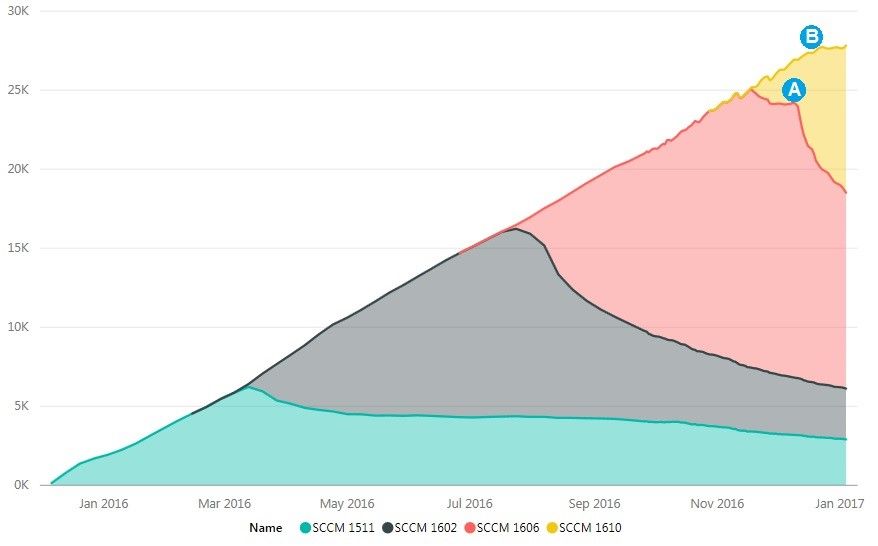 The yellow section at the top of the chart represents tenants that are on ConfigMgr 1610.  We released 1610 in November but did not make it available to all Current Branch customers until December 8.  As you look at the yellow area, you can see exactly when we made it generally available – it's where the slope of the line accelerates (Point A on the chart).  You can see that throughout December the pace at which organizations upgraded to 1610 was both consistent and fast . The next big data point is the slope of the cumulative number of tenants – especially during the last two weeks of the year (Point B). Notice that the number of customers on ConfigMgr Current Branch flattened during those two weeks.  This means that there were very few customers upgrading from ConfigMgr 2007 or 2012 to Current Branch during those two weeks. One final piece of the picture to consider:  Look at the slope of the line of customers upgrading to 1610 vs. the slope of the line going to 1606 and 1602 .  The slope ( i.e. rate of customers upgrading to that update) accelerates which each release !!!  As an engineer, this is one of the most exciting data points possible.

Here’s everything we learned in a nutshell:

I have a request for the customers still on 1511:  Set aside the time to update to 1610 this week.  Try it, you’ll like it.  :) As you do this, your confidence in the stability and simplicity will grow and you’ll be confident in keeping up with the updates.  After all, 1702 is just around the corner. Here is the link to the directions on how to do the in-console upgrade right now. For customers still on 1602… hey, you’ve upgraded once, now just do it again!
0 Likes
Like