Turn on suggestions
Auto-suggest helps you quickly narrow down your search results by suggesting possible matches as you type.
Showing results for
Show  only  | Search instead for
Did you mean:
SQL Server Column-Store: Updated SAP BW code
By

SQL Server column-store is generally supported by SAP BW since end of October 2012. One of the prerequisites is importing the correction instructions of SAP note 1771177 . Last week we published a new version of this note with additional improvements. We recommend to update your SAP BW code by applying the new version of this SAP note using SAP transaction SNOTE.

SQL Server 2012 column-store does not support the data type DECIMAL, if the precision is greater than 18 digits. The data type DECIMAL is used in SAP BW for key figures. In SAP BW you cannot create a key figure with a greater precision than 17 digits on your own (using SAP transaction RSD1). Therefore the restriction of the column-store index should not be an issue. However, SAP can deliver such key figures using BW Content. There are a few SAP applications based on SAP BW (for example SAP BPC), which use such key figures with increased precision.

The updated SAP BW code takes care of cubes containing key figures with increased precision. It always creates b-tree indexes on the e-fact table of these cubes, independent from the column-store configuration defined in report MSSCSTORE.

You can easily repair these e-fact tables after applying the updated BW code by running SAP report MSSCSTORE. Select "Repair indexes of all cubes" in the tab "Set default for all cubes". Choose your current system default (either "Use column-store index" or "Use b-tree indexes"). By choosing your current system default, you won't change the column-store definition of any cube. However, high precision cubes, which are configured to use the column-store, are repaired by creating b-tree indexes. After that, you should activate aggregates of the repaired cubes, if needed. 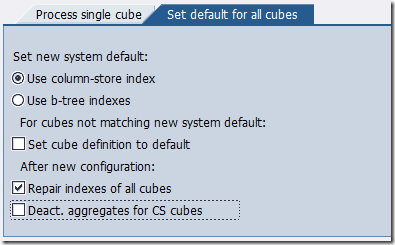 Any SAP system upgrade of BW systems using the column-store works fine. However, when upgrading from 7.0x to 7.3x, the column-store indexes may be dropped during the SAP upgrade. They have to be re-created after the SAP system upgrade using report MSSCSTORE. This issue will be fixed in SAP Software Upgrade Manager (SUM) in the next support package (SL Toolset 1.0 support package 6). We will describe details in SAP note 1796298 within the next weeks.