The latest SAP support packages contain a bunch of improvements for SAP BW running on Microsoft SQL Server. The improvements can be assigned to two areas:

With the newest SAP BW SPs, the index layout has been optimized and standardized for all SAP BW releases as of SAP BW 7.00. The indexes of existing SAP BW cubes are automatically adjusted to the new layout when running BW process chains for data load (process type "Generate Index"). 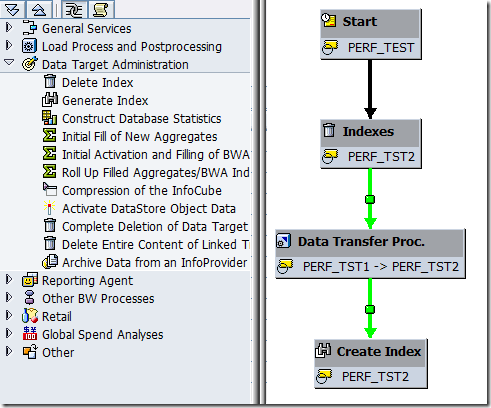 The P-index on the f-fact tables has been removed without replacement. This index was a relic from long ago when database query optimizers could not use more than one index for a single query. We have not seen any BW query for years which could benefit from the P-index. The index was just a waste of space. However, there is one exception: For SAP APO we need a unique P-index on the f-fact table. As a matter of course, this index still exists for APO cubes.

Finally we also removed the index on the unit dimension, for e-fact and f-fact tables: the 030-index. The unit dimension is not supposed to be a selective field in SAP BW queries.

The DIMID generation for the dimension tables works like this: For each row to be loaded into the cube we first select the DIMID from the dimension table by specifying all characteristics. When the select returns a row, then there is nothing to do. If not, then we have to generate a new DIMID. Selecting the DIMID is always fast, because we only have one fitting index (the compound index 010 on all characteristics of the dimension). However, when not using a process chain, there are additional single-column indexes. They may result in a suboptimal execution plan on SQL Server. In order to avoid this, we have added an optimizer hint (index 010) for the select on the dimension tables when specifying the DIMID. This was already fixed in SAP note 1689011 "Slow Selects on Dimension Tables" .

Dimensions with more than 16 characteristics

There is another potential performance issue regarding this select on the dimension tables. This issue is database independent and caused by the fact, that the SAP Data Dictionary only supports 16 columns per index. Although there is no (and cannot be made any) improvement for this in the SQL Server specific code of SAP BW, I want to describe the general solution for such an issue here.

One of the major changes in the BW cube compression was the usage of the SQL Server MERGE command (for cumulative cubes) as of BW 7.11. This resulted in a faster cube compression while reducing the needed transaction log space at the same time. This code was down-ported to SAP BW 7.0x and delivered as a correction instruction in SAP note 1635177 "BW Compression with MERGE for 7.x" .

In the newest BW support packages we added further improvements to the BW cube compression. Dependent on the size of the request to be compressed and the index statistics, the MERGE command could be executed with a suboptimal execution plan. We tried to fix this by adding an optimizer hint to the MERGE statement. Unfortunately, this was counterproductive in many cases, dependent on the cube definition, database statistics and fill rate of the SQL Server buffer cache. Therefore we removed the hint again in one of the next support packages. You can remove the hint manually by applying SAP note 1860832 "Performance improvement for BW cube compression" .

When compressing a cube which leverages the column-store, we have to drop and re-create the CS-index on the e-fact table. The index creation is using 8 CPU threads in parallel per default. Details about parallelism and how to change the default values is described in SAP note 1654613
"SQL Server Parallelism for SAP BW" .

Although the repartitioning is a relatively seldom activity in SAP BW, we implemented some performance improvements here. In the old implementation indexes were un-necessarily recreated. This has been fixed in the newest support packages. As a result, the runtime and the transaction log space requirements decreased considerably.

For the indexes, which have to be created, we now use 8 CPU threads in parallel per default. This can be configured the same way as described above for the cube compression.

We already delivered several improvements in the past. As a matter of course, they are all included in the newest BW SPs, too. However, many of them can be implemented as a correction instruction and do not require the newest SPs. The most important are the following:

Correction instruction in SAP note 1581700 "PAGE compression support for DDIC & Hom./Het. System" : Dramatically reduces the space usage for SAP NetWeaver systems running on Microsoft SQL Server. It does not only apply to SAP BW systems. Details are described at https://techcommunity.microsoft.com/t5/Running-SAP-Applications-on-the/SQL-Server-Page-Compression-b....