Windows 11 I've noticed tries to simplify the Power Options which I'm fine with. I have multiple laptops, though only 2 of which are currently running Windows 11. These two Laptops are an ASUS running a AMD Ryzen 7 Processor the other an Acer running a i5 9th Gen processor. Both Laptops use NVIDIA GFX cards, different models of course. There have been some major bugs with the Power Options that I've found, I don't know if it's something to do with Hibernate or Sleep. I did not have this issue while I was running Windows 10 on either laptop, & I do not have this issue with the 2 laptops still running Windows 10 that I haven't updated to Windows 11. Is anyone else seeing something similar or experiencing the same issues?

Issue(s): I'm not sure where this falls if it's a sleep issue, a screen turned off issue, or a combination of the two. After I first upgraded to Windows 11, one of the first things I noticed was that I could no longer just wiggle my mouse or press a keyboard button to get my screen to turn back on after it turned off. That now, to turn it back on I have to press the power button. The second thing I noticed was that after I press the power button to turn my screen back on, that after entering my PW/PIN my Desktop takes longer to load than if I was powering it up fresh, & that it would experience major lag. Most of the time, the icons I pinned to my taskbar won't even appear. Apps that were open before the screen turned off no longer want to respond & I'd have to end task on them or wait sometimes 3-10+min for them to be clickable/usable without lag. To get the icons that I pinned to the taskbar to reappear, I have either open that program/app, or restart the PC completely. It's that way on BOTH of my laptops now, yet the ones running Windows 10 with the same power settings don't suffer from this issue. This happens with the default power settings, with any of the power mode settings, & with device put to sleep set to never. I told my son, that his Grandmother's i3 Laptop from 2012 is running/responding faster than his i5 does after we try to log back in after the screen cuts off while he has a program or two open on his desktop. That's with hers having 5 or 6 programs open, it's still responding faster, & she's using a regular hard drive where we are both using SSD drives.

Another major issue I've found, is that Windows doesn't seem to care what I have my turn screen off set to. One laptop I just set the screen to never turn off (when plugged in), the other one I have set to turn off after 1hr (when plugged in). Both of them are still turning off, even though they show the plugged in icon. It's as if Windows 11 isn't seeing them as being plugged in even though it's showing the icon, but is instead seeing them as being on battery.

This is being experienced on both a fresh install of Windows 11 & with one that was upgraded to Windows 11.

In the two photos, you'll see the missing Taskbar icons after I reopened my Desktop after I let the screen turn off. The lower photo is showing the power settings that the AMD Processor Laptop is set to currently. With the screen still cutting off on it. 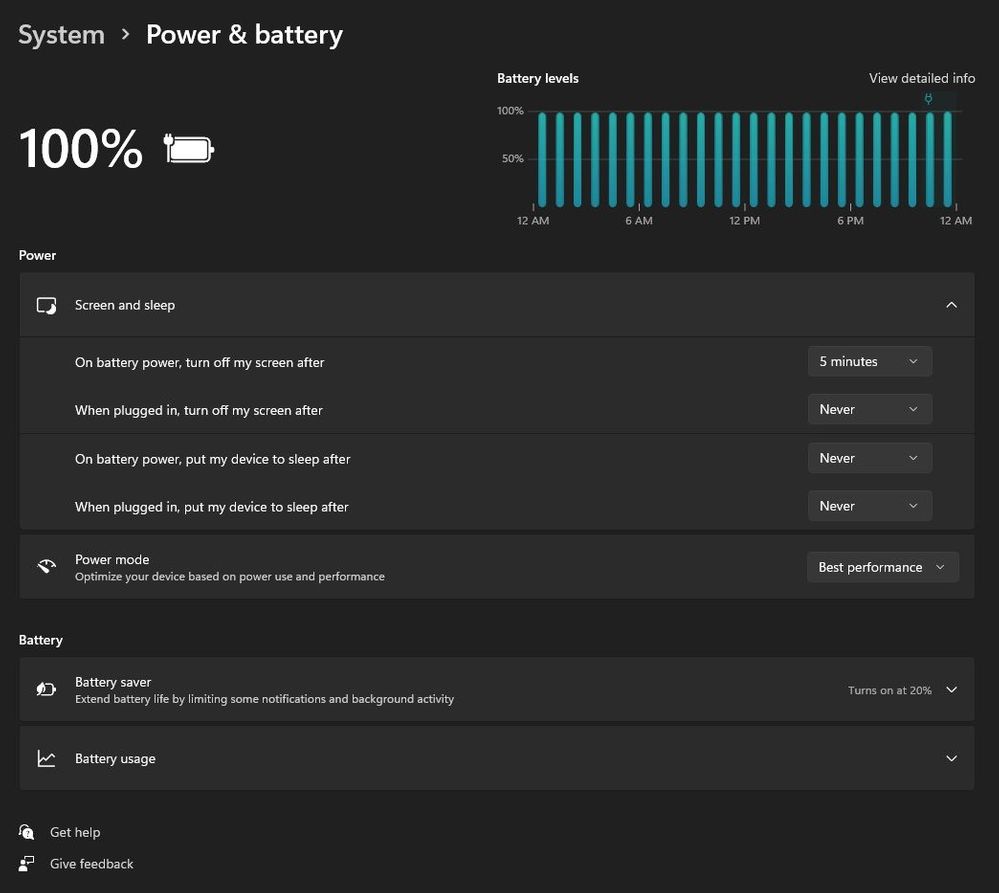