I have used Windows 11 since the beginning of this month and like it. I have had no other severe problem except my pc crashing with a green screen of death (That haven't happened in a while, also is to be expected from Windows 11 as it's new).

The biggest problem I have had is that my HDD that I use for my games and other stuff is stuck on 100% Active time all the time. It makes my games load slow and sometimes won't start (The one game I have tested that have had the most noticeable problems was Fortnite). I wan't to believe I have tried everything on the internet to try fixing this, but to no avail. I spent days trying to fix this as I only have this problem that is the big problem that blocks me from using my PC as I want.

I did try running the command "chkdsk D: /f /r /x" in command prompt and at first it did something and my PC worked as normal for the rest of the night. The day after it was back to square one. I tried to check it again but it didn't help this time, no matter how many times I tried.

On the 9th day on Windows 11 I tried to go back to Windows 10 because I had upgraded my PC to Windows 11. It said that the files for Windows 10 didn't exist anymore and it didn't want to go back. Day 11 I had given up on going back. I did try to fresh install Windows 11 as my last choice and that fixed some minor problems and crashes, but not my HDD usage.

The HDD worked perfectly on Windows 10 and the only choice I got now is to fresh install Windows 10 and lose everything on my C disk or to stay on Windows 11 and hope the problem can be fixed (I believe that it's Windows 11 that causes the problems, as the HDD is healthy otherwise). Here is a picture of the task manager when the PC is on desktop with no games or anything else in use. 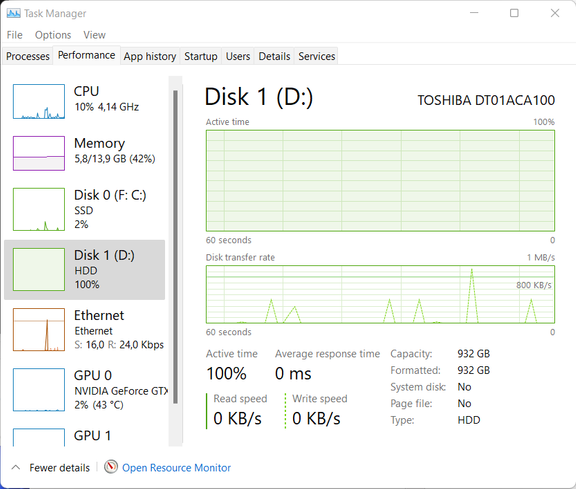