In the most recent update, the icons on the "Frequently used apps" page are not reordering correctly.

When an app moved up the list (I have it in reverse order), the other apps it moves past shuffle around in what appears to be a random way. At least I have not determined a pattern yet.

I have received the update to Microsoft Launcher 5.3.0.50373 and this is still an issue. Two examples of apps that will not appear on the Frequently used apps page are: Google Voice, Microsoft Teams.
0 Likes
Reply

Re: RE: Frequently used apps page - Icons not reordering correctly

I have updated both Microsoft Launcher and Android (from 8.0.0 to 9) and Google Voice still will not appear on the Fequently used apps page. Microsoft Teams finally appeared after opening it many more times.

@Gorden_Lin If I drag an icon to the Frequent used apps page, it starts moving correctly based on frequency of use. But if I try to have it move to the page by opening it repeatedly, it never moves onto the page. Some do and some don't. This is different behavior from the past.
0 Likes
Reply

similar issue exists in which an app is updated or removed, the page mess up. there will blank spaces instead of showing all frequently used apps in selected order. 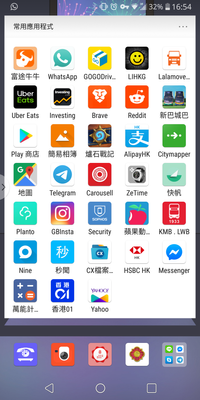 That's so odd. I ran a V30 on Android 8 for almost 2 years and never saw that. What happens if you upgrade to the latest beta?

well, i successfully fix the problem after setting reset and restore, for now

Is there a limit on the number of apps that are tracked on the Frequently used apps page? My company recently updated the way Intune configures our phones, resulting in duplicate apps, one for work and one for personal. When I tried to "promote" Yammer in the work group to the Frequently used apps page, it would not appear. I tried changing the arrangement to 12 columns by 12 rows and exactly 90 apps appear on the page, with plenty of room for more. I have tried removing some of the apps, but am still unable to "promote" the work Yammer to the page.

Is there a setting or other way to expand the number of tracked apps without having to reset Launcher and build up the page again?

I tracked down the odd behavior for Yammer and the Work area set up by Intune by my company.

All the other Microsoft apps, e.g. Word, originally also had two installations/icons, one with the lock (company) and one without (personal). I was able to uninstall the personal icon and the company one (with the lock) remained in the frequently used apps screen. I can successfully have either the personal icon, the work icon or both.

I need to correct the last post. What I have found since then is that if I install any app from the Work (company Intune) app store, it will only appear in the Frequently used apps page if the same app is installed from the Google Play store.

Both the work (lock) icon and the personal icon then appear in the alphabetical list. They also display separately on the Frequently used apps page and move location independently based on usage. This works well for me for apps such as Outlook where I can have separate icons for work and personal accounts and they are easily distinguished by the presence or absence of the lock on the icon.

This seems odd to me. I should be able to choose to have only the Work installation, and have it appear on the Frequently used apps page without having to install the app a second time when I don't need a Personal version.

For now, I just need to be sure to install the same app whenever I install a new Work app. To be clear, if I install an app only from the Personal Google Play Store, it behaves as expected.

Thanks for your report.

We will fix it(work app can't appear in frequent apps page if not install the same app from Play Store) in the next release. Please stay tuned.