The Progress Line is visible in the View.  However, when I go to Print Preview, it is not displayed.  Everything was working fine yesterday (18-Jan-22) but today (19-Jan-22) I am having this problem/issue.  PITA.  Is it a mystery?  Gremlins?  Any ideas?  I have coped and re-saved the view.  Created a new view.  Associated the view with different tables.  Poked around in all sorts of places.  No luck. 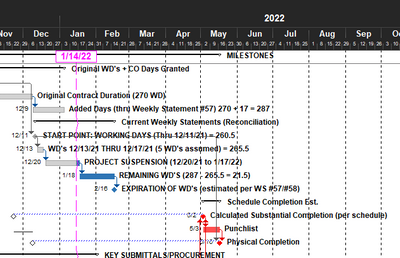 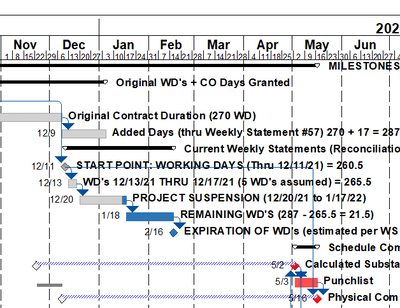 @John_Frantzen  OK... fixed it.  A few minutes ago... it dawned on me that yesterday afternoon, as I was using my web browser (Chrome) there was a blue screen crash (netwtw1.sys "system thread exception not handled").  So I opened-up a system restore point (January 9th) and after that process completed (took a few minutes) I fired-up MS Project... and the Progress Line now appears when I print.  So... problem solved.  But it is somewhat unsettling.  The BSOD must have trashed some sort of system application or extension that MS Project uses to generate the output.  Hmmmmm.

Well... here we go again. I've had to do this twice since my last post (twice in the past 2 days)... go to a system restore point (1/27/22). Heaven forbid... there might not be a "clean" restore point next time. Back in the "Old Windows Days" (Win7) there would be a whole host of restore points available in the pick list, But now, with Win10, the OS has a mind of its own... and there is typically only one restore point shown. Unless I consciously create a restore point. Long story, as you all know with things of this nature. We keep creating systems that are more and more complex... and ultimately we end-up with less control and potentially an inability to deal with specific problems.
0 Likes
Reply

Well... I ASSUMED it would work (sys restore)... but alas...NO, it didn't. Good grief. The "Progress Line" is very convenient in order to show a "status date" on the schedule output. As I said, it is visible "in the app" but disappears during the output stage (regardless of the printer being used). I suppose I can just go into the PDF with Bluebeam and ADD the necessary visual effects. Thank good ness for Bluebeam. But typical PISS POOR Microsoft coding. Has ANYTHING really changed with Microsoft Project since... "Project 95" -- back in 1995? Or Project 98? Or 2000, 2003, 2007? And then, we have the "new" versions (2010, 2013, 2016, 2019)... which are, from a basic usability standpoint, no different. Nonsense. And a waste of time.
Maybe in "enterprise" terms, but in tersm of a standalone installation... it is still the same program. Pathetic.
0 Likes
Reply

Thank-you, Sir.  I am an old veteran.  I can easily create new bar styles and develop derived data based on formulas, etc.  I am familiar with that.  I appreciate your reply.  I developed red, yellow, green "stoplight dots" based on a float threshold range... 20 years ago!  Honestly, regarding the disappearing progress line issue, I am not very interested in "internal" MSP workarounds.  As I said, it is pretty easy to go into Bluebeam after-the-fact and insert a vertical line with a "Status Date" text box at the top (right under the calendar timescale) and then paste THAT onto every page of the schedule report (akin to what MSP was doing prior to this issue cropping up).  Fairly easy.  But still, a pain.  What really irritates me is that, as I said, this program, on a standalone basis, is basically the same as it was in its "Project 98" incarnation.  Granted, in an "enterprise" setting, there is probably a lot more capability now -- but my guess is that this additional capability is primarily a function of the evolution of the network environment and various database add-ons apart from the native MPP file.  Don't get me wrong... I don't bow-down to the altar of any piece of scheduling software.  I like MSP!  And it is even good middleware.  I do a lot of quick/initial schedule development using MSP... because it is EASY.  And then, an XML import into P6 generates a nice clean WBS... with only a teeny bit of cleanup and fussing to do afterwards.  P6 cannot easily deal with "cut-and-paste" external data from various sources (which is what a LOT of scheduling on big projects entails -- gathering information from multiple/myriad team players and trying to AVOID typing everything over again).  P6 has other issues, too.  I have a list as long as my arm.  Why can't Oracle fix these things?  Pretty obvious if you are a regular user.  But P6 is just a tiny sliver in Oracle's world.  Just like MSP is a tiny sliver in Microsoft's world.  Back to MSP... for example, if you are doing any sort of serious project management scheduling work and schedule delays are not fully resolved by a contract modification... you have... negative float.  The fact that MSP cannot (without apparently developing some sort of sophisticated high-level coding or advanced custom variable definition) selectively display the "critical" highlight/color based on a NEGATIVE float value (i.e., only a POSITIVE threshold is available -- see FILE->OPTIONS->ADVANCED... and go to the bottom of the pop-up window)... this is frankly inexcusable.  Let alone displaying "longest path" (akin to P6) where there may be a mix of float values -- depending on the calendar assignment -- on the same sequence path.  So... in MSP, I have to continually reset the "Finish no Later Than" constraint date on the terminal node to match the "early" date -- in order to display only the longest (critical) path in red.  But then, the longest path float value is "zero" (as opposed to the desired negative number).  Again, I am a 40+ year veteran and over the years I have worked for a couple of software companies (CPM scheduling software) and I'm pretty sure that it would be fairly simple to implementing "feature" -- not hard thing to code.  Which speaks to the act that Microsoft is putting ZERO effort and resources into MS Project... and the fact that NOBODY within Microsoft (directly) will every investigate this issue.  It has always been the odd stepchild of Office.  Anyway... thanks for the reply... I appreciate it!  My guess is that one of these days the Progress Line will magically reappear... due to some sort of Windows Update being applied.  Or whatever.  That's just the nature of the business, I suppose.  Would be nice if someone with actual product authority/pull would read these forums and take action.  But when you're the 2nd biggest company in the world (market cap) and life is soft... then why bother?  But we small people have to complete.  Sorry about the rant.  From a customer service standpoint, I supposed this issue now goes into the "resolved" category.  THANKS again, Sir!

John,
Wow, tell us what you really think.

I believe you are correct that Project is not a big swinger for Microsoft and it has evolved more into the enterprise/teams type of application. But it is what it is and a number of people use it for planning/scheduling in both stand alone (my bailiwick) and enterprise environments. When I first started using Project (circa Project 1997) I quickly realized limitations but was heartened by the inclusion of VBA. Wow, I thought, I can make this do more of what I want/need. And that's what I've done for myself and many users on this and other Project forums.

If you have suggestions for improving Project I urge you to submit your suggestions through the Feedback page. And before you think of poo pooing that idea, keep this in mind. You'll never get what you don't ask for.

With regard to the progress line issue, I noticed a trend of user posts recently so I forwarded the concern to a contact at Microsoft. That's where the note about Microsoft being aware of the problem came from. Microsoft has never been forthcoming about if and when any fix for application glitches will be released. I've never used progress lines myself but given that many users love graphics and in fact may need progress lines to help orient their management on plan status, I came up with a workaround using custom bar styles.