Turn on suggestions
Auto-suggest helps you quickly narrow down your search results by suggesting possible matches as you type.
Showing results for
Show  only  | Search instead for
Did you mean:
Project Server 2013: Project Sites, Alternate Access Mapping and Themes
By


This posting came about following an issue spotted my one of our MVP’s, Hans Hoet of Ordina, Belgium.  There are a couple of issues that are worth being aware of relating to the automatic provisioning of project sites when you create a new plan from the Project Center in Project Web App (PWA), one relating to the use of Alternate Access Mappings (AAM) in SharePoint Central Administration and the second relating to the use of different looks to your project site templates.


First the issue with AAM.  If you have your alternate access mapping configured so that your Default zone uses just your machine name – for example http://project2013 , and you then add a mapping for the Internet zone as http://project2013.contoso.com , and you have your PWA site directly under this Url then you will see this problem.  It only manifests when sites are created automatically when creating a new plan in PWA, so the steps would be to go to Project Center, create a new pan by selecting New, Enterprise Project (for example), give the new plan a name and then click Save.  All appears to be OK and the Schedule web part loads – but if you look at the queue you will see a job, Project Site Update, with a state of Failed But Not Blocking Correlation.  The error you will see if clicking on the link will start something like:


On to the second topic – creating and using custom Project Site templates.  I’m not specifically covering how you would create a custom template, and this hasn’t really changed much from 2010 – just the place you start from, The Settings ‘Gear’ in the top right, then Site Contents and you can create template site from their.  See http://blogs.msdn.com/b/brismith/archive/2010/03/15/customizing-the-project-site-in-project-ser... for the full 2010 details and I’ll probably add a new 2013 version soon.  One option for sites in SharePoint 2013 – and this is just as applicable to Project Web App and the Project Sites is to ‘Change the Look’.  So for example I can take a new blank (not connected to a project) Project Site – and change the look to one of these delightful samples: 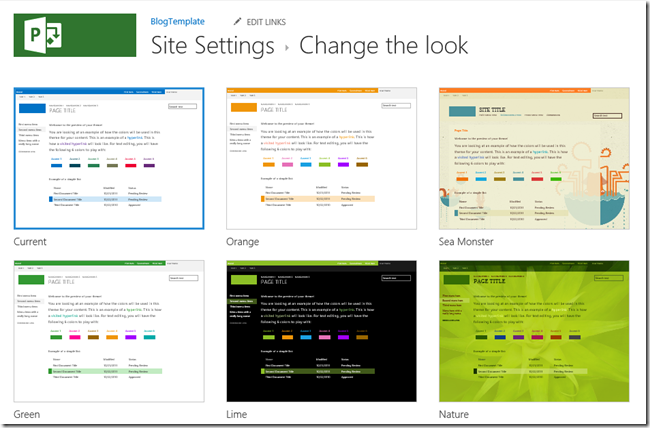 For example I could choose the one in the top right, and also add a new Link to this blog, and then save this as my template. 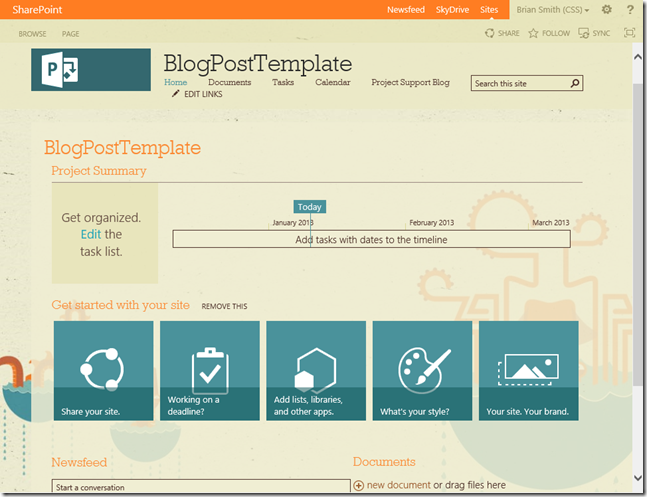 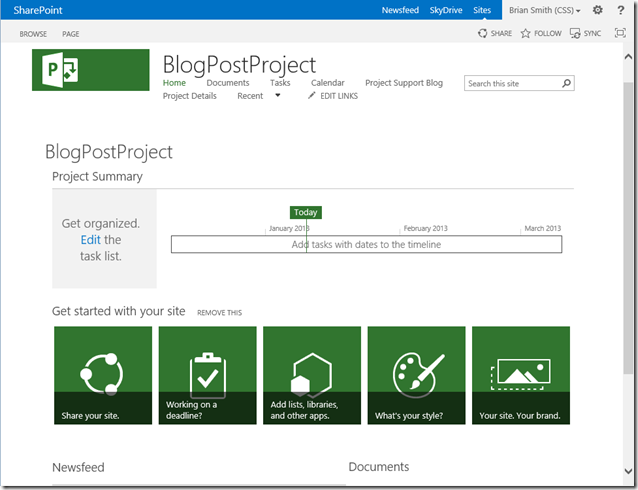 Not quite what I was expecting.  Well actually I’d done it before and also followed the code in a debug session – so it was what I was expecting…  At least this time.  When we provision a new site we are also applying the theme of PWA to the site – so this ‘undoes’ some of the customization that you might have expected to see *** update 3/4/2013 (confirmed with the Product Group that this is considered 'by-design' and was a conscious branding decision)***.  I do still see my new link – and if I had added content I would still see it (assuming I had checked the option when creating the template to also save the content).  I have also seen some issues if you then try to ‘change the look’ of this new site – with the ‘change the look’ page being empty – as if the Gallery contained no options – or in some cases just showing the current version.  I think this may be related to the first issue – as in preparing this blog posting and using the workaround for issue 1 of using the FQDN and adding the Internal Url for the machine name all seems to be working OK.  Just to prove it I’ve re-applied the same look to this site, which showed as the ‘current’ one anyway (because we had programmatically overwritten some stuff) and got back to: 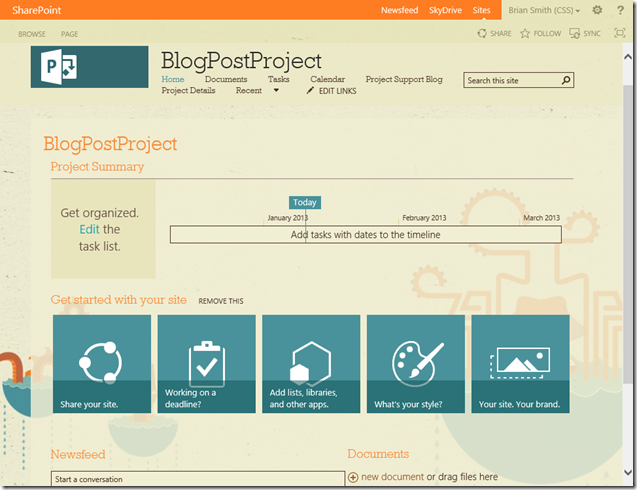 I still think there is some work to do here both in terms of understanding the themes and the galleries, and for the first issue there is a bug logged, although with the workaround looking OK I’m not sure when this will get fixed.  Also I have an ongoing thread with Hans, who brought this to our attention, as in his environment, which includes other AAM settings and is running on Azure VM’s (this technology is in preview, so not currently supported), there are still some provisioning issues.  So probably more later perhaps including a posting on the use of Azure virtual machines for Project Server 2013…