I'm currently using some Power Automate flows that produce adaptive cards using key phrases but I don't want to have the message to come back saying my name via Power Automate.

So rather than using the Flow bot option, is there a simple way to use Power Virtual Agents? 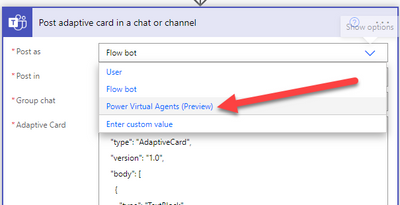 My assumption is that if I want to have it say a specific name with a specific profile image, I would have to build an App in Teams. Just to develop a bot and then use that bot after I've published it. Making an app seems really convoluted just so I can have a bot identity.

Any thoughts? If I have to make a bot, is there a way that doesn't involve an outside third-party app or creating an app at all? When I went down that route it seemed too complicated for my skill set.