For Plans that we have "Send notifications about task assignment and task completion to the Plan's conversation feed."  DISABLED in the "Edit Plan" section, we are still receiving group notifications when comments are posted.

Updates seem to be disabled fine for new tasks and compelted tasks.

Messages are restricted to the Group inbox, not to users who are actively subscribed.

Anyone else seeing this behavior?

Yeap, I have seen this and I think is by design...any comment you make at the task level is treated as an e-mail that is sent to the Group and not related to the work done with the task itself
0 Likes
Reply

Yes I'm seeing the exact same thing.  This is very annoying and is causing our staff not to want to use Planner.  If every time a staff member makes a comment to update the progress of a task that a notification is sent out to everyone on that plan ppl will stop using it.   There has to be a way to turn this function off.

Hi @Tom Robey, This is certainly an issue with the Planner. The only way to get rid of this is by unsubscribing their membership from groups. This will protect them from receving the notifications to their Inbox. The notifications will reside in Group conversations alone.

This can be done by the individual users themselves or by the group admins from Edit Group and uncheck the option 'Send copies of messages to members inbox'. Hope this helps.

I have reviewed the group and it is already set so that the "Send copies of all group messages and events to members' inboxes" is unchecked.

We are astill receiving emails anytime a comment is added in planner though.  Any thoughts why?

@Davy Montgomery, Can you also confirm that the users have been unsubscribed from the Group membership?

I myself am one of those users, how would I verify? I believer they are but am happy to double check if you can point me in right direction.

I went to MAIL clicked on the group and the clicked the drop down for JOINED.  It shows an option for "Subscribe to this group by email".  So I believe that would mean I am not current subscribed.

These are the two places I am speaking about. 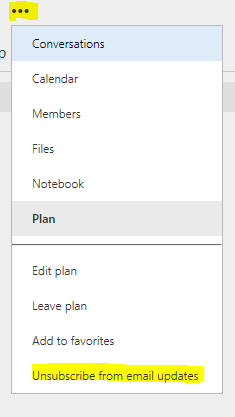 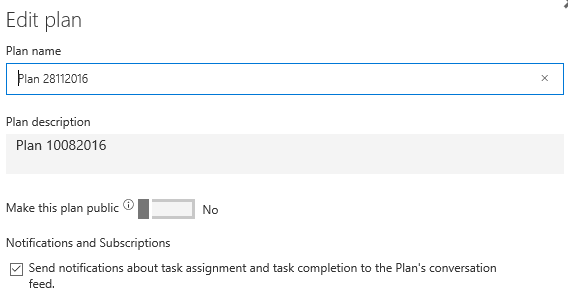 Looks like I have them set correctly, but, I am still receiving emails.  Here are screenshots. 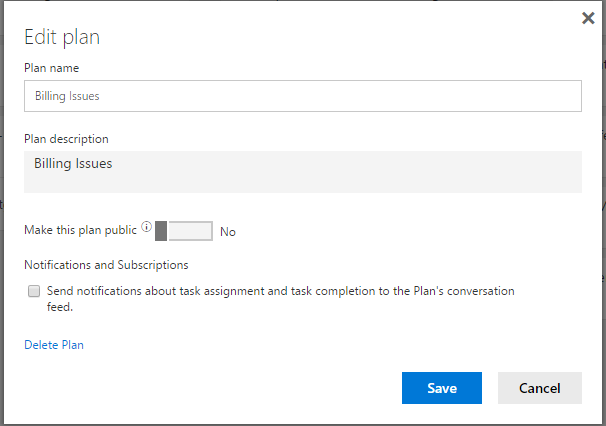 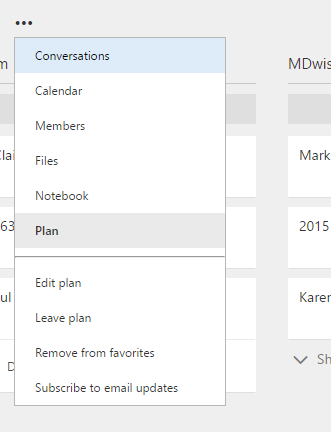 This was the whole gist of this thread in the first place. That is just how it works, it seems. You receive emails for comments no matter what.
0 Likes
Reply

This has become very frustrating almost making it unusable for our Group.   I have a group/team of 15 people they don't want to see what tasks I've completed or comments I have made.  Unsubscribing isn't an answer either, because then you no longer get group messages in email, like when a meeting is taking place.

Hi @Tom Robey, definitely this is an problem which needs to improved y Microsoft. But I remember Microsoft has plans to improve this by offering us more options to subscribe for email updates. Hope to see some good things soon :)

We have the same issue. A resolution to this is overdue

After starting two pilots using Teams & Planner for projects at my organization - this rates as the number 1 complaint (closely followed by not being able to link predecessors / successors), and they're pretty vocal about it.

I noticed on uservoice that there are 11 close-sounding entries, all with varying number of votes. Perhaps someone could combine those... and everyone on this conversation go vote it up if you haven't yet.

Maybe @Joanna Parkhurst or @George Bullock could comment if this is being considered or is in development? I don't see a Microsoft comment on any of the user voice entries or an entry on the roadmap, but I'm also not sure what rates being on the roadmap vs blog post vs youtube video of a past Ignite breakout session. For anyone else in the same boat as me trying to identify how to follow along, @Brian Smith helped explain some of what we could expect in another thread

Thanks for sharing, I'll try to combine these soon. I usually don't get visibility to posts until they have 50-100 votes due to the volume of suggestions we receive.

Would those three encompass what your team is looking for?

@Joanna Parkhurst - thanks so much! I see that at least that bigger suggestion in uservoice was combined with another one I didn't even see!

Yes, that's very close to what I imagined. I realize my experience is a bit colored since I only came to planner after you could see it in Teams, so I and all my project members pretty much expect conversations on unique cards to work the exact same way as unique conversations in Teams.

I'd clarify that beyond what's mentioned in uservoice as in-development, we'd hope that once you're "in" conversation... such as by being assigned to the task, or @mentioned, that you'd remain in the notification scheme (be it banner notification in teams or email, ideally per a setting you'd get to choose) unless or until you opt-out of following that individual conversation.

Second, and you did hit on it, but I don't see it mentioned in the in-development notes on uservoice... the ability to opt-in to following the conversation on a card... even if you're not assigned or @mentioned. That would be incredibly useful both on planner card conversations, and conversations in teams generally.

I see. These are all notification options we're investigating now, we don't have anything scheduled or planned yet. Now that we've finished our basic notifications we're going to continue to work to improve and expand upon them. Feel free to reach out to me in the future for an update.

I wanted to chime in on the conversation above.  Like other users here in the forum I came to Planner as a result of using Teams.  I have set up several testbed teams and integrated the planner tab into them in hopes of improving the Teams experience.  Unfortunately because of how Planners email notifications work, it has exploded my inbox with useless irrelevant information.

I understand that part of this may be due to how we are implementing Planner/Teams, but my situation is almost identical to Ian Bruckner's.  I will echo entirely his sentiments in this.  Email notifications may be desirable in some situations, but I have been digging for over a week for a way to disable the notifications we're discussing here.  If we can't turn them off, we'll have to use some other means of task planning within Teams.

I agree.  AN email for everycomment defeats the purpose of planner, IMHO.

Has there been a solution to this issue?