I posted about this in the SharePoint community, but no responses there. As this is actually a problem with the Onedrive NGSC, maybe that was the wrong place to ask?

This is the long read. If you want the latest update, it's posted at the end. Onedrive seems to hang on files, but I have no idea how to investigate this and solve it.

Is there a central troubleshoot topic for sync issues, and are there do's and don'ts when syncing SharePoint libraries to multiple computers and multiple users?

My clients report that starting today, the NGSC (preview) does not download new files. Yet uploading seems to be no problem. This seems to happen on multiple computers (and thus under two user accounts)

I'm yet to investigate, but they don't mention that the sync client shows error messages about it.

1. I have no clue where to start investing this as uploading seems fine?

2. The searches on internet give me support articles with basic "end user" troubleshoot steps. Are there more in-depth troubleshoot articles for IT Pro's?

3.  Are there do's and don'ts when syncing complete libraries (and thus working in it) with multiple users and to multiple computers, that Microsoft doesn't share publicly? Lessons learned?

Prior to Office 365 my clients used one Dropbox personal account and synced those on multiple computers. No (serious) sync problems I know of. When they migrated to Office 365 their first idea was to use one Onedrive for Business and share that with they other. I convinced them that their files are "company files" and thus belong in a teamsite they both have access to.

At first they used the horrible Groove. Last month I desperately installed the NGSC Preview with Sharepoint sync to minimize the sync errors. Now again they have an issue. I'm afraid they rather go back to Dropbox if they keep getting these problems. Unless I can tell them why it happens and what we can do to minimize it from happening!

The Onedrive client has been restarted frequently. It keeps giving these two statusses:

- There are files being updated in Onedrive (rough translation from dutch: Er worden bestanden bijgewerkt in OneDrive...)

- The list of files to process is empty. At some moments there are a few files and then they disappear from the list. It's unclear if these files are really being updated. They are not the 58+ files.

- Processing changes is either taking a very long time or it is stuck.

I tried the folowing:

- Placed a Word document in the user's Onedrive for Business folder. This file got uploaded/synced by the sync client successfully. Edited the document in Word Online. Changes were successfully synced back.

- Placed a Word document in the local sync folder of the 58+ Photo's. This document synced to online portal, got edited there and changes were synced back.

- Downloaded one of the photo's from the portal to the users download folder. RENAMED it and stored it in the user's local folder of the 58+ photo's. The photo synced back to online.

- There is no issue with the photo being to big or long filename.

What I want to do:

- See a log file of Onedrive, telling me what is taking so long?

- Clear a cache or whatever to get Onedrive going.

- Reset onedrive.... but that is not a solution imho.

So this indeed was a backend issue, which Microsoft has solved today. My Onedrive clients are syncing again and everything seems to work again.

Thanks @Nigel Soakell for updating with the status from the Office 365 Admin.

Seems that you will need a support case to have those logs looked at.

Nothing else I could recommend if there's no path issue, or characters...

One thing also to try is to check the results of SaRA tool (diagnostics.office.com), it has some ODB checks included already...

Thanks. I have tried the diagnostic tools, but it found no issues. The quickest way for now I guess is to just reset Onedrive and let it sync all content again. That's about 5 gb of files in total. As it are 3 SharePoint libraries and 1 OfB that have to set up again, it isn't that much work. But the problem exists on 4 computer, so all of them will have to sync everything again.

Contacting Microsoft support takes a lot of time and I think there solution is to just reset it.

If the issue reappears, you will need a support ticket. Good luck!
0 Likes
Reply

Yes, you're right about the support ticket. My tactic in this is to first find out if it's gonna keep happening. :)

you got the right tactic :)
0 Likes
Reply

Thanks for the updates. We are also having the same issue. New file folders coming down fine, no actual files though.

We tried re-installs, purging the local files and re-syncing the entire site, and even setup a new Windows 10 user profile. All with the same failed results.
0 Likes
Reply

Also have the same problem on a number of clients tried uninstalling and going back to older versions of the client however the problem still remains even with the older client. Tried the same thing on a fresh install of Windows 10 Pro with exactly the same result.

If you didn't already, create a service request in your Office 365 Admin Panel. A support member will call you, probably within an hour or so. As the issue is known within Microsoft, he will ask you to collect some (log) files from OneDrive and run a tool called Fiddler to collect network traffic. There is no known sollution yet, as far as I know.

Confirming same issue here.  Uploads to Sharepoint fine, but it's not downloading.  Of course, that means also means we don't get any confirmation that it uploaded the file.  Only by checking via the web portal can we see that the files are uploaded.  Hovering over the icon shows how many files it needs to download and that it's stuck at 0.0/KBs

Please continue updating us on the status and any timeline for resolution.

Just letting everyone know that Microsoft have now told me that this is a backend issue and you can now monitor the progress updates in the Sharepoint Admin portal, as it is showing as degraded. See below 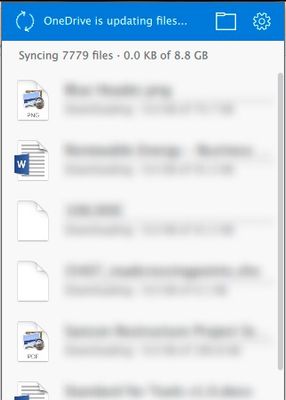 Hi David we are also experiening the same issue with one of our clients whilst others are now working fine, I have raised another support ticket with Microsoft, as although they claim it is now resolved this is obviouly not the case for everyone. I'd recommend that you also raise a support ticket yourself. I'll post any updates here once I have any further information. I'm currently waiting on a call back from Microsoft.

Hi David I have just had a call back from Microsoft and they have said that if you have tried unlinking the account and relinking it (or uninstalling and starting again), then there is nothing more that can be done on the client side and we need to just give more time for the fix to roll out. At least another business day is what I am being told as apparently the fix can take up to 3 days to propagate. If after that stage it still does not work then I need to contact them back to get the case escalated.  I'm hoping they are right and I'm not just waiting for nothing.

so I Juat found a solution to this problem.
go to your onedrive folder on your computer and figure out which folders are creating problem, the folder will have a  constant refreshing icon notifying the sync.
now log onto your onedrive accountin browser and go to the same folder. you will find one or two extra files that are not present in your computer (in the same folder). delete those files from the online folder and delete them from recycle bin too.

P.S. you may wish to saave those file ofline if you want to resolve this issue without loosing the files

so I Just found a solution to this problem. go to your onedrive folder on your computer and figure out which folders are creating problem, the folder will have a constant refreshing icon notifying the sync. now log onto your onedrive accountin browser and go to the same folder. you will find one or two extra files that are not present in your computer (in the same folder). delete those files from the online folder and delete them from recycle bin too. wait for 2-3 munites and done PROBLEM SOLVED P.S. you may wish to saave those file ofline if you want to resolve this issue without loosing the files

In the cases outside of this brief one-time service interruption, you may want to see my bug post demonstrating a very easily reproducible major infinite-sync-loop "processing changes" or "looking for changes" forever bug: