I have enabled the group policy setting to prompt users to move known folders to onedrive.  On my workstation, I am now receiving the prompt, but when I click the start protection button it fails.  The error code returned is 0x80004005. I've been searching for any logs from Onedrive which might provide more detail as to why it failed, but haven't turned anything up yet.

What could cause this to fail? 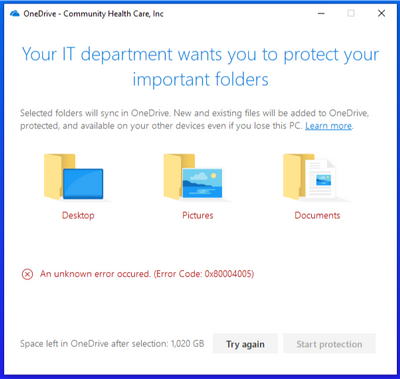 Background - I previously had redirected known folders to OneDrive using the old method.  I did not see the prompt to protect known folders initially when I got the new OneDrive version.  I turned off the old folder redirection policy and logged off/on a couple of times to allow it to redirect my folders back to the original location.  After that, the prompt to protect my folders appeared.  It's possible that some old bit of configuration is causing the Known Folder Move to fail.

I've ran into this exact issue on my first test laptop when the KFM feature appeared.

Have you got any where with the problem?  I haven't had time to look into it any future but am not hoping to have a closer look this week some time.

Any update on this issue ?

Hey I found the fix of this issue. This is an issue as sync client is not updating the location of the known folders. You can manually update the location which will resolve the issue.

Manually moving isn't the best option for us as we want to roll it out without having to touch the devices.  I haven't had chance to test it again.

I might give it a few more weeks and hope all the bugs are ironed out.  I want to roll it out via GPO.

So far, the escalation team seems to be something of a black hole, which a ticket goes in to but nothing ever comes out of.

@Jitin SadanaCan you elaborate a little more on your fix?  How did you find that the sync client is not updating the folder locations?  Where did you manually change this to resolve the issue?

I am also facing the same issue when enabling this setting via GPO. Could you please tell me the version of sync client which you are using?
0 Likes
Reply

I've been through multiple versions at this point, OneDrive updates to new versions, but the issue continues. Currently, on my primary computer I am running build 18.162.0812.0001.

Here are a few more details about my issue that I've found since I posted originally:
My issue definitely seems to be account specific.  I've enabled KFM for many other users in our org at this point, and no other users get this error.  For me, I've tried across multiple computers, including freshly imaged computers.  The version of OneDrive client doesn't make a difference either.  It's been happening since the first KFM enabled version came down, and continues still in the current versions.
The one thing I guess I haven't tried yet is a clean install of Win 10 direct from media, not domain joined.  I don't expect that to make a difference, but I'll spin up a VM today and try it.
I've had a ticket open with OneDrive support since mid July, and after initial activity going back and forth with the support rep, remote sessions to demonstrate the issue to him, collecting and sharing log files, trying different client versions, different computers, etc, I was told that the ticket was being passed to their escalation team.  Since then, there has been zero activity other than replying to my request for updates to tell me that it's with the escalation team and there is nothing more to be done until that team responds.  (Ticket #687064, in case anyone from MS is reading and wants to look into it.)
So, I guess the tl,dr for this update is that there is no update.  Just more detail.
0 Likes
Reply

And, FWIW, I did build a fresh VM with Win10 installed from media, log in with a new local account, and sign into OneDrive with my O365 account. Even then, I get the same error when trying to enable Known Folder Move. So, definitely not an issue with the client pc or environment specific policies etc.
0 Likes
Reply

Have been having the same issue for weeks and weeks.

It's (probably) account specific, but there are many reasons why it might not work, eg if your profile folders are redirecting to another volume than the one OneDrive is residing on, it will not work.

After correcting some of those documented prerequisites, it still doesn't work.

Also: my work style is completely nomadic so I log in and out of a lot of machines on a daily/weekly basis (AD joined, Azure joined, workgroup joined) - I suspect that if one of those machines has an issue preventing KFM, it probably blocks the feature working anywhere. Would be horrible architectural design but I would not be surprised.

Conclusion: sadly another MS feature that is not tested, half baked and not thought through.

Which is a pity because it's a good idea: makes your profile data more available, potentially protects against ransomware etc => finally an area where MS could make a difference... alas.

I have the same issue and have confirmed it appears to be account specific as new accounts have been OK. Not found a fix
0 Likes
Reply
Anonymous
replied to  Anonymous

I found out I had two onedrive sites. deleted both and created a fresh one and still no better!

I've found that if you have an Group Policies in place relating to Folder Redirection, you need to get rid of them.

I haven't tested fully, but it was due to an existing policy.

Just a quick update to say that I've still made no progress here.  Support has tried a few more things, to no avail.  One thing they tried a few weeks ago is worth noting -

Initially, support was going to delete the empty library and rename the one containing my data to remove the '1', but they were not able to do that for some reason.  Instead, they had me turn off Files on Demand and sync my entire onedrive library to My PC, then unlink my onedrive client from my account.  Then they deleted the library with the '1' attached, and updated my account to point to the empty library, without the '1'.  Then I signed back in to OneDrive on my PC, linking my account to the client, and it uploaded all of my data into that library.

One important note here -- Despite assurances from the support rep that this process would serve to backup and restore all of my data, that was not the case.  This process caused data loss.  It turns out that OneNote notebooks are stored in OneDrive, but managed by OneNote, and the OneDrive client does not synchronize those files/folders.  I lost multiple OneNote notebooks because of this.  Fortunately, the most important and frequently used notebook was cached by OneNote on my PC, and I was able to copy and paste every note from it into a new notebook.

Deleting the extra library did not fix my issue with Known Folder Move.  Support has had me try a couple of other things since then, but nothing has helped.  Most recently, they asked me to reproduce the issue and send them the client logs again for further review.

I am thrilled to report that OneDrive support contacted me today and my issue has been resolved.  Unfortunately, the root cause in my case may be completely different others, but I want to share it here anyway just in case it might be of help to someone.

As I mentioned previously, OneDrive support had identified and removed a second OneDrive for Business library related to my account, which had a 1 appended to the end of the UPN.  As it turns out, there was actually a 3rd OneDrive for Business library for my account, this one using a UPN with our 'domain.onmicrosoft.com' domain instead of our primary domains.  It seems that the 2 accounts were somehow conflicting when KFM tried to turn on, and causing it to fail.

So, even if they've already looked into a possible second library for an account having issues, it might be worth having them look again, this time for one using an onmicrosoft.com domain or alternate domain associated with your tenant.

I hope that helps!

All we are facing out MS sync center folder-redirect and approaching MS OneDrive Business for our home user drive. We have a GPO apply to both the users/PC for folder-redirect that points the user "Document" folder and redirect to our DFS path CSC .

We went through the following exercise to disable folder-redirect and delete the CSC  ,but the issues we see is that the ”Document “ folder properties still have the location pointing to the user home drives located on the DFS at a path like \\domain\dfsroot\users\%username%  CSC.  This breaks from OneDrive backup KFM to backup for “Documents” because the properties location still points to a CSC location and it doesn’t default.

The only way to resolve this by deleting the user profile and re-creating it. This way the KFM for Onedrive sync the “document” folder.

If you guys can help us with a script or some sort of migration tools that would be appreciated.

Thank you for reaching out. 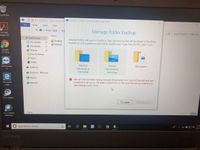 @Nelson95 I'd recommend posting a new thread rather than replying to an old one that's not related to your issue.  You'll get more visibility and be more likely to get an answer that way.

With that said, I notice that you mentioned using both folder redirection and offline files, but you only mention having disabled offline files.  Did you update your group policy to stop the folder redirection?  You'll want to leave the policy in place, but change it's settings to redirect the folders to the user profile.  If you just remove the policy completely, it will leave the folders pointing to that redirected location.

@Steve Whitcher It's May of 2020 and we're still having this problem on about 75% of our computers.  It would be nice to know how one would delete other OneDrive accounts if that indeed is what the solution is.  This problem has been driving us mad for over a year without a solution.