What ever is the first one installed the second one raise an error of compatibility.

Is there a solution ?

That's correct, it's a known issue assuming it's an error similar to below (the wording may be different): 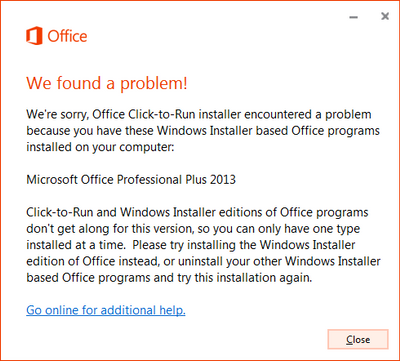 Those Office 365 and MS Project 2016 installations you mentioned use two different technologies and can't coexist.

"Unfortunately, you can't have Office products of the same version (like 2013 or 2016) that use two different installation technologies installed on the same computer. This also applies to standalone applications like Access, Visio, Project, Skype for Business, or OneDrive for Business."

Here are more specifics on what is supported as well as what isn't: Supported scenarios for installing different versions of Office, Visio, and Project on the same comp.... 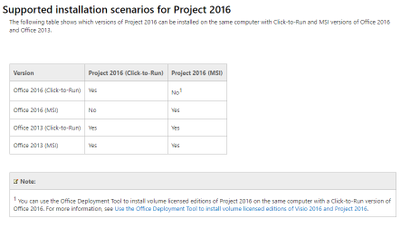 Your options are somewhat limited, if you have access to Project 2013, I believe that will install ok.  If you had a volume licence version of Project 2016, there is a way to have Project 2016 and Office 365 but it takes some setting up as outlined here -  Use the Office Deployment Tool to install volume licensed editions of Visio 2016 and Project 2016.

Thanks for your detailed reply.

Does it means that MS does not provide any Project that may run with Office 365 ?

Yes it does, it is called Project Online. Here you have an overview of available plans: https://products.office.com/en-us/project/compare-microsoft-project-management-software?tab=1
1 Like
Reply

Yes there is a solution but you need to contact Microsoft for the exe that fixes this problem. Once you have Office 365 installed, go to the Admin portal and raise a service request with a description of the issue.  Ask that they call you back and provide a number you can be contacted on.  Usually the call back is within an hour but could be longer. They will walk you through the fix and provide you the solution.

Supported installation scenarios for Project 2016 The following table shows which versions of Project 2016 can be installed on the same computer with Click-to-Run and MSI versions of Office 2016 and Office 2013. https://technet.microsoft.com/en-us/library/mt712177(v=office.16).aspx This is the Config file when we are going to install any type of office versions by using click-to-run method.
Preview file
95 KB
Preview file
24 KB
0 Likes
Reply

We purchased MS Project 2016 and now our company switched to 365 and my project no longer works as it says it is incompatible .  But my license is still valid.  I don't really want to buy it again!  It is rather expensive in ZAR!  Any suggestions?