I used MakeAppx.exe created an .appx file from my win32 .exe file

Create a certificate for package signing

I try to use MSIX Packing Tool and convert the .appx to msix format that suitable for Win10 store. 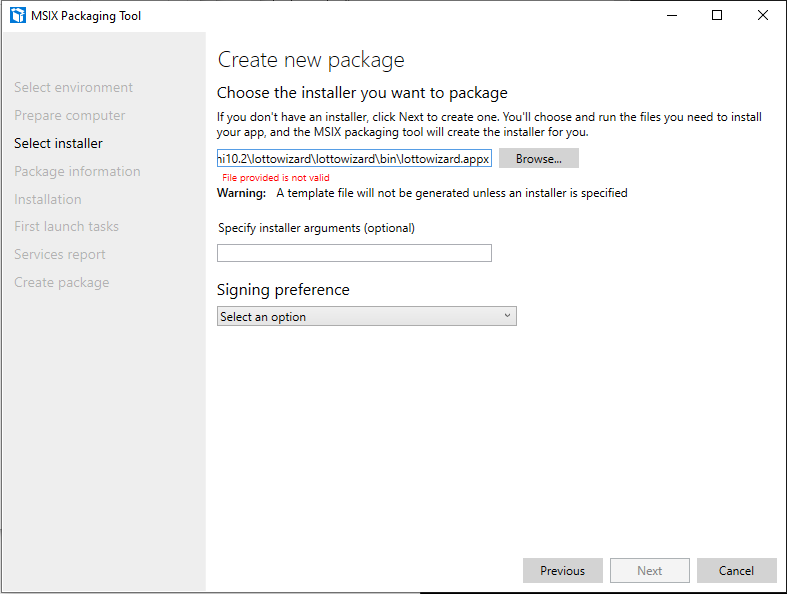 but it said 'file provided is not valid'.

@aloha999  The Microsoft MSIX Packaging Tool is designed to do one of two things:

You can use developer methods to create an MSIX installer package from the Win32 executable components OR you can use this tool to recapture the traditional installer. You seem to be trying to combine both methods.  If the cause is that you did everything necessary but ended up with a file with .appx file extension, this is possibly OK (some early vendor tools didn't use the msix file association).  The Store accepts both .appx and .msix file extensions, what makes the package "MSIX" is in the contents of the internal AppXManifest file.

What did you put inside the .appx package created with MakeAppx? If you put there the executable to launch your application, all its dependencies and an AppxManifest with the appropriate entries, then your package is as good as an .msix and you don't even need to use the MSIX Packaging Tool. You could submit it to the Store directly as Timothy said.

If you tried to put the installer executable in the .appx package and then convert it with the MSIX Packaging Tool, that will not work. In that case what you would do instead is convert the installer directly with the tool, i.e. put the .exe where you were using the .appx in the packaging tool. You could also use the packaging tool to sign your package when it is created in a single step, instead of calling signtool separately.