[Guest Blog] A Journey of Firsts in Mixed Reality

[Guest Blog] A Journey of Firsts in Mixed Reality

This guest blog was written by Kimberly Castro, Program Manager in Microsoft's Cloud + AI division. She shares about her career journey transitioning from the military into in the world of mixed reality as part of our Humans of Mixed Reality series.

I knew I wanted to be a part of Mixed Reality the first time I heard about it. I had just finished my interview loop with Microsoft when I heard that one more team wanted to talk to me before leaving. Shortly after, which actually felt like an eternity due to interview nerves, I was in a focus room with Miguel Sussffalich. After a few questions, he started telling me everything he could about the IVAS program. 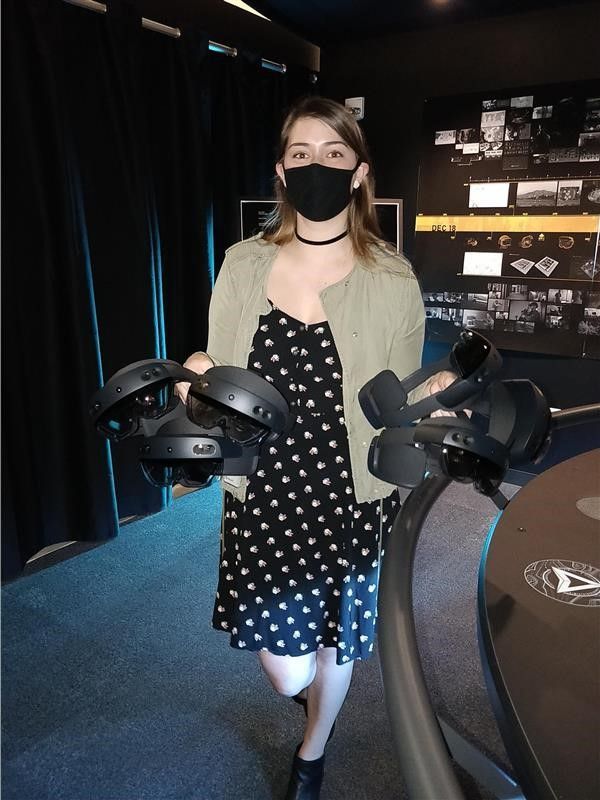 Admittedly I was late to the game. I had never put on a VR/AR/MR headset, never heard of the HoloLens, and if I'm completely honest, I'd never used a Microsoft product aside from the Office Suite. You see, I grew up in an Apple household. You're probably wondering how someone like me even managed to land an interview at Microsoft in the first place, especially coming from a rather non-traditional tech background.

After graduating from the University of Arizona in 2013, I enlisted in the Army as a Linguist. I spent the next two years learning Mandarin Chinese and eventually found myself in the Special Operations Command working Intelligence, Surveillance, and Reconnaissance (ISR) missions. After one more year, I started doing similar work at the NSA. At that point, I started seeing myself in a government contractor position once fulfilling my enlistment contract. It would've been an incredibly natural and easy transition to make. Not a whole year had passed when the Army said it was time for me to move again – my 7th move in 5 years. I was extremely frustrated to have to pack up my life and travel across the country again, but I had always wanted to spend time in the Pacific Northwest – and it ended up being my best move yet.

As the end of my contract was nearing, I received approval to participate in the Microsoft Software and Systems Academy (MSSA), a transition program for active duty military and veterans, which is essentially a C# bootcamp. Upon completing MSSA you are guaranteed a first-round interview in the form of a phone screening with Microsoft. I did well enough at the first round to be invited back to participate in a full interview loop.

I was sitting across from Miguel, learning about the IVAS program for the first time. He told me about a synthetic training environment where soldiers could practice clearing an enemy and a hostage-filled building safely and effectively. I was immediately transported back six years to basic training, where I first experienced the military's Glass House training drill. Glass House is a generous term – in reality, it is just tape placed in a square on the ground, in a field, with a door-sized opening. "Rooms" were extended or added with more tape to alter the scenario, making an already limited training environment increasingly vague and less effective. You and your team members would have to imagine the walls, the roof, the enemy, the hostages, everything. The drill sergeants would yell out increasingly complex instructions, and eventually, your team would fail, reset, and try again. Of course, there was no way to know if you missed an enemy or pointed your weapon at a hostage or team member by accident, just whatever the drill sergeants could see. Additionally, with all the imagining that had to be done, it was impossible to realistically create the stress levels that an experience like that would entail in real-life. Essentially it wasn't the best way to train, but it was all we had.

As soon as Miguel paused, I said, "Oh, this is going to save lives," and from then on I was hooked.

I graduated from the MSSA program with offers from three different teams within Microsoft and an offer from another company. None of the other scopes of work came close to the experience I knew Mixed Reality was going to provide. So, in January of 2020, I joined the Delaware team as a program manager. I was just as excited as I was terrified. I was so sure people would quickly find out I was a fraud who tricked her way into Microsoft – over a year later, and I still have moments when I feel like this. I like to joke that it's not imposter syndrome because I'm actually an imposter (I know, I know).

Within mere days of joining the team, I experienced my first hologram. A friend slapped a HoloLens 2 device on my head and showed me a bunch of cute animals dancing around. He explained that I could resize the figures and place them wherever I wanted in the physical space. I think I stayed in device for about an hour playing with everything I could; it felt like magic. I would've stayed for longer, but I suddenly remembered that I was in the middle of the dev space yelling out, "This is so cool!" every few minutes while people were working. To this day, one of my favorite things to do is run demonstrations to show off what is possible with Mixed Reality. I love seeing people experience the magic of their first hologram or surprising someone who has seen it all before by dropping them in the middle of New York City or the bottom of the Red Sea.

Another aspect I enjoy is customer focus and human-centered design. The infinite feedback loop and drive to figure out what someone needs, particularly when they themselves don't know, really resonates with me. Accomplishing that gives me the same feeling as snapping the last puzzle piece into place; it's a satisfying completion. This puzzle, however, is infinite.

The public sector has been the perfect place for me to dive in because I can really understand the user – after all, I used to be one. It's incredibly comfortable to speak the same language as the customer, and I am so excited to have the opportunity to continue in this space. In the future, I would enjoy getting into the commercial and consumer or entertainment studios as well. I would love to help create something that furthers scientific research or builds something solely for a user's enjoyment. Again, I love the public sector, it's the perfect place for me to learn and grow, but I will want to take a step back from life and death situations one day.

It's difficult to express how much I've learned over the last year and yet I know I've barely scratched the surface. I feel so privileged to work with artists, musicians, designers, and engineers every single day. I have never considered myself a creative type, but working in this space with these incredibly talented individuals has, for the first time, sparked a passion to create in my professional and personal life.

I hope you will discover an exciting new world with mixed reality too - the possibilities are endless!