"Ask the developer for a new app package. This package may conflict with a package already installed, or it depends on things not installed here (package dependencies), or is made for a different architecture (0x80073CF3)"

The error seems to point to a dependency failure.  I already have Visual C++ 2015 installed, so I'm not sure what else it might be.  I've been using (and updating) To Do this way for probably a year and this is the first time I've had issues.  (I have to sideload due to Microsoft Store being blocked by my organization.) 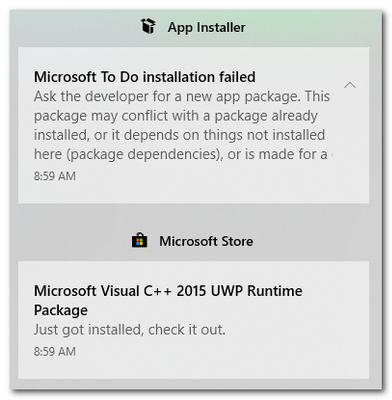 I just tried manually installing the Visual C++ libraries that are listed along with To Do in the Store, but that didn't help - same error.  To Do install still only goes to 20%, says Visual C++ installed and then fails.

Don't you just love it when a janky MS workaround breaks. I'll likely bump into this issue in the next month or so, will add anything if I can help. Will follow this with interest.
1 Like
Reply

Oh, it's a hoot! Just don't upgrade until you hear it's resolved. This started for me when I tried to go to 2.54 (they're now on 2.56). As a side note, the older install in the store (1.48) works fine. It's just so old that I decided to do without and use the web version for now.
0 Likes
Reply
best response confirmed by Steve Wright (Contributor)

Finally resolved this. After checking out this article, I took a look a the app package installer event logs, which stated I needed to "Provide the framework 'Microsoft.UI.Xaml.2.7'". That framework is right there in the list of files along with To Do. Installing it allowed To Do to complete its installation

I have no idea why it doesn't install automatically as a prereq/dependency for To Do 🤷‍:male_sign:.