Is there a feature in whiteboard that allows you to manage 100 participants at one time to either view only or edit? The current steps to change it one by one is quite time consuming.

@LeslieTo Microsoft Whiteboard is currently going through some fairly substantial changes as it moves to be based on OneDrive files rather than a separate service. While you can opt in to the new OneDrive version there are limitations for people still using the App etc. The limitations are due to be resolved and OneDrive Whiteboard become the default in the next few weeks.

In the OneDrive version you can disable "Other participants can edit" which will turn them all off in one go. I can't really comment on using it with 100 participants, I would want to start smaller initially. 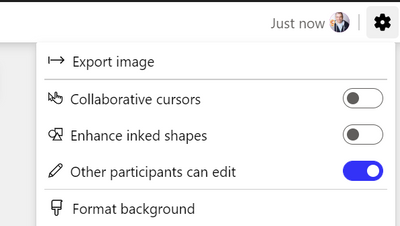 thank you for the response this is helpful. Is there any clarity to how many users the new whiteboard can support? There are opportunities whereby there are large scale events but still Whiteboard seems not to be able to support anything above 50. Is that correct or there is a number that microsoft provides?
0 Likes
Reply