The issue appears to be a sync issue. If the client goes to message the user they get an error Due to policy changes some chat and calling features are no longer available. I have verified that the organization he is in does have external on as well as communication with Skype. (notice you can see the external user's status)

If the client clicks the link to continue the conversation it takes them to a new chat, but they are unable to reply to each other. They each get the error "We ran into a problem sending this message. Try again later. 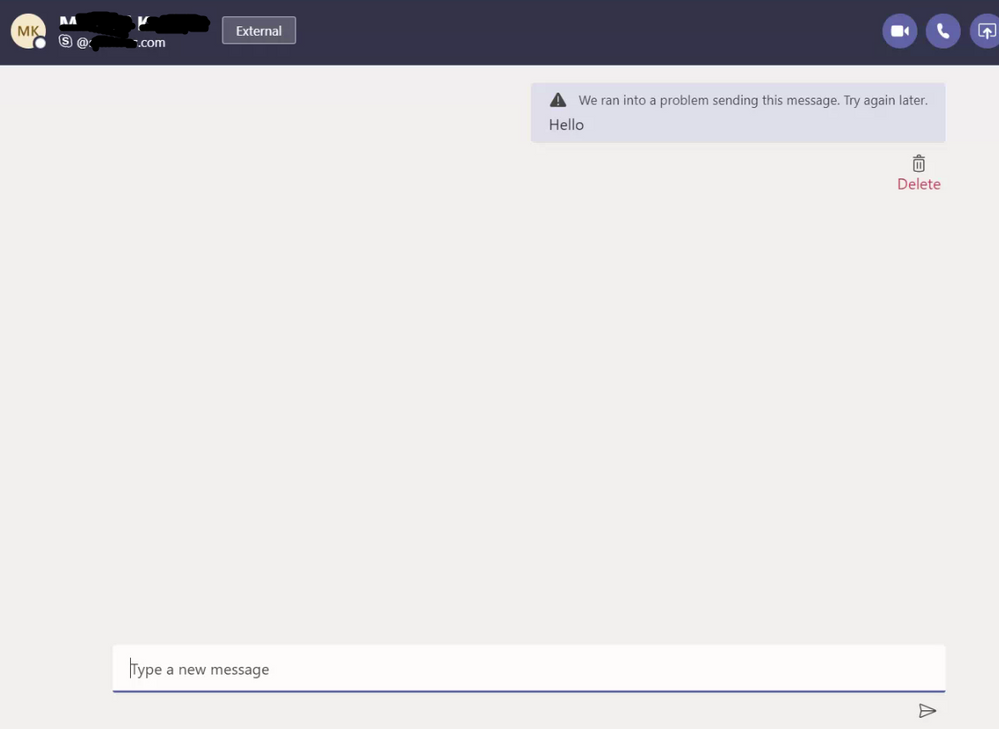 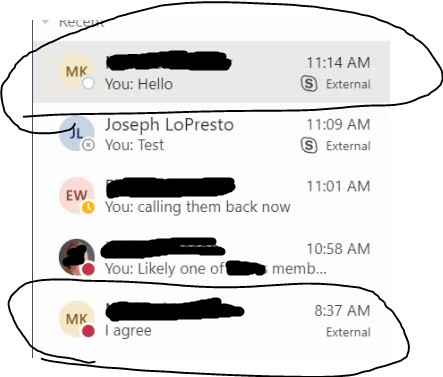 Finally they CAN message each other in teams if they do it via a email. 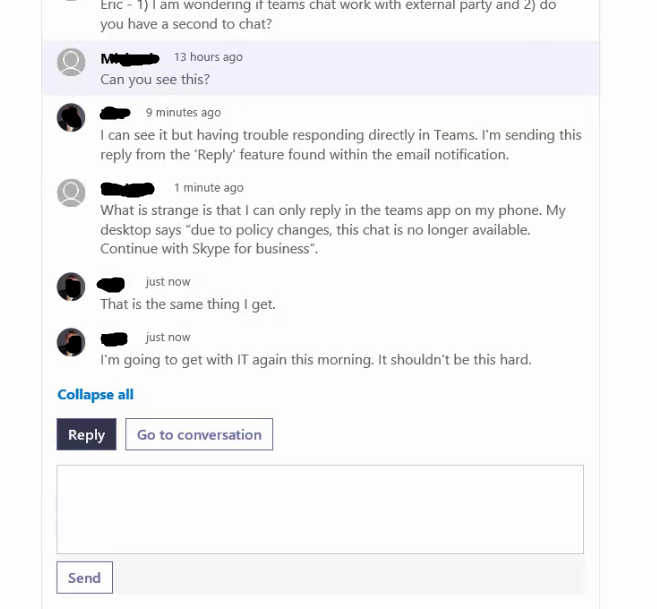 I would appreciate any help in settings to check or a direction to head in. Thank you.

I did manage to play out a conversation and video call to a Skype user the other day and it does in theory work, however it is worth calling out that this type of interaction is in preview.

However for me if both sides of the convo have Teams, we don't really want the external user showing up as a Skype contact.

As I presume we are talking about Skype consumer and not that the user is a Skype for Business user?

The external users is using Teams, which is why I'm a bit confused why the skype icon is showing up. And it only shows the skype icon on the second "contact" for them which the first message redirects to.

Also they are only attempting to use the chat functionality.

OK, so I think the issue is that  we have got the instance of the contact with the Skype symbol which basically you get if it is a Skype contact.

I will have a play about with the Skype contact I have, see if I can reproduce and then ultimately find a way of getting rid and just getting back to the one Teams based instance.

Will let you know if I find anything.

I am going to have to do some more digging as my mind is blown by what I have just witnessed.

The only thing that I could get a handle on is that if the External user is a Skype for Business user they will show as a Skype icon with white background and if consumer it will be a blue background.

However it seemed that whenever I tried to communicate with my accounts that were associated with the Free Teams versions, so using the same commercial account you are likely to have a Skype account against, it hijacked it.

All it cared about was finding Skype Users externally, nothing else.

I then tried from the other side of the convo and whilst it found the Teams user, the messages never arrived.

I then and this really made me do a double take. Within my Teams Org, it showed in the drop down where you would normally switch between your home and Guest Orgs, one of my other Teams Orgs, without (Guest) in the name and it was there that I saw the conversations.

Chat has always been a constant thing and it was more you would switch Team orgs for the Teams side of things, so not sure what the score is here.

So like I say I will keep digging for some sort of consistency or meaning.

I turned off external access to Skype, hoping it would force it to return the Teams instance of the user but instead it still latched onto the Skype instance and just said this contact is not configured in a manner that will allow communication. So I suppose at least it spells that out front and centre.

I then tried to add the account as a Guest, hoping that would list it as an option when starting a new chat but it didn't.

So the plot thickens and I dig deeper.

I did start to think that OK, well is this just something that is another conflict for free Teams as people would sign up for those likely using the same Email as an existing Skype account and now they have introduced this functionality it is getting itself in a pickle. I might try and setup a new Teams Org that has no association with Skype and see how far I get.

Have you found a solution? I have the exact same problem with my organization and cannot find any solution as of yet.

I am afraid not or at least I haven't checked in a while, but presume nothing has changed. Only experienced this in a Dev environment, so didn't really look much further.

I would check the basics though and ensure that the external user you are trying to connect with, has the external access ability permitted within their tenant and the same for yourself also.

This might sound silly but have you tried logging both users out and back in? I had the exact same problem you described here and had been searching for a solution (which landed me here). Couldn't find anything that we hadn't already tried so I just had us both log out and back in and it started working exactly as it should. I couldn't believe the solution was so simple (at least on our end).

Hi, I know it's been a few months  but if you are still having issues, this is what I have found in our company.

When using Teams to contact external companies, both end user must have their Teams coexistence mode set to "Teams Only", any other configuration causes major issues. This is due to Teams using a Skype back end to transmit messages externally. Hopefully this will change after July when Skype goes end of life.

Top 10 Microsoft Teams questions from customers around the world