When I join a Teams meeting, or Video call someone, my own video feed looks fine for a few seconds and then goes almost completely green.

If I join a meeting first, and can see my own face on screen, the video is completely fine, but when someone else joins, my video changes to almost all green, with thin black lines and whilst I can barely be seen, it appear to move me off center. 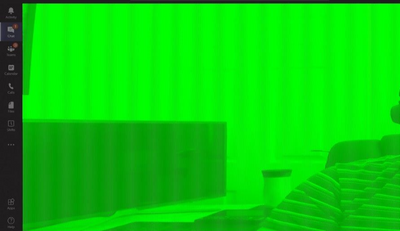 This issue does not happen in Skype for Business, just Teams.

It happens on the laptop built-in webcam and my external Logitec c920 webcam.

I work as Tier 2 IT so have tried all the standard fixes...  removed all video devices and reinstalled in device manager.  updated GFX drivers. (its a Radeon R5 btw)  and so many more attempts to resolve.

Any help would be greatly appreciated.

@ChrisBrodie9 all codecs have been removed - no effect

all camera and skype video setting set to default.  all the "auto" settings have been set to stay the same. - no effect.

Would be interested - do you get the same experience in the web client (https://teams.microsoft.com)?

@Christopher Hoard Teams webapp is fine.  no corruption at all.

1.) Do you have another machine to try this on? Log in and see if it works?
2.) How about the mobile app?

@Christopher Hoard Mobile app is good, but hard to test on another corporate device as we're mot really going outside at the moment due to current world health issues...

Yeah, for sure - isolated here too.

Well, it's the desktop for sure. As the experience is clean on the web app, mobile app and in other clients (Skype) I would say to raise a ticket as soon as possible with the screenshots, confirmation and a link to this conversation, all the steps. I would also try to replicate the session with the green screen and immediately after pull the logs (right click on the sys tray icon)

I have no idea what would be causing this - but I would like to understand when it is resolved with MS. It would be great if you could post it back here in the community.

I am seeing exactly the same behaviour on my desktop. Logitech C930e and Teams Version 1.3.00.4461 (64-bit). Have had the same setup for over twelve months with no issues, and noticed this problem last week, maybe coincidentally a few days after the update to 1.3.00.4461.

Video is fine in all other applications and for the first few seconds of a Teams call. Turning video off and back on during a call gives another couple of seconds of uncorrupted video each time.

Have also tried everything I can think of, with no luck.

Interesting development. If I conference with a Android mobile user, or Chromebook user the video does not corrupt. As soon as the connection is to a PC installed version of Teams it fails. Conference with a web based user still corrupts, but it takes maybe 15 - 30 seconds rather and 2 - 3 before the video goes green. Desperate to resolve this......

Did a complete rebuild of PC with fresh WIndows 10 1909 and straight away had exactly the same issue. Replaced the old ATI Radeon R9 390 I was using with a Nvidia GTX960 I had in the cupboard, and the problem has gone away.

@Owen_Hile I was updated to 1909, then changed HD Camera driver to Microsoft USB camera driver.  This seemed to fix the issue... for about 30 minutes and then the same thing happened again.

Fortunately I work in IT and asked the stock management guys for a newer, better laptop.

Not much of an answer, but an answer of sorts.

I am suffering with exactly the same issue, and have tried the same things.

Fresh install, swapped to another logitech webcam etc. Still not resolved. I also have a AMD graphics cards, but the computer is brand new i5 with a top end gigabyte desinaire motherboard. Not idea what the issue is.

Can anyone help further on this?

I have the same issue. I have Logitech C930

in Teams, my camera works a few seconds then it turns green.....

Unfortunately I was unable to resolve the issue. I had the green camera issue on both HD webcam and laptops inbuilt camera so not likely a driver issue. I believe another user had to replace their gfx card.

My issue was with my work laptop, and as I work in the IT department, I just swapped out my laptop for a new one. This doesn't help you at all, but I believe it's an issue with the gfx card, not the camera/drivers
0 Likes
Reply

yeah I also suspect its a teams and graphics card issue, I cannot get teams to not use the hardware acceleration despite unchecking the tick box in the settings. Also I do see the graphics card and ram usage spike when the camera is being used.

If i run the camera through a 3rd party app like snapcam and then ask teams to use that source it works. But its a clunky work around. I do suspect it must be something to do with AMD graphics, hard ware acceleration and Teams. But I have no idea what the resolution is. I do feel a bit cheated that I might have to upgrade my graphics card to resolve. Thats not going to be cheap!

Have exactly the same problem with my Logitech BRIO camera.

I'd like to add my experience, in case others have a similar setup as me, because I managed to easily fix my issue.

My camera had been working perfectly fine from April until I noticed the green screen appear yesterday. This may have coincided with me rebooting Parallels and installing a new update in the last few days.

THE FIX: Under the menu: Devices > USB & BlueTooth, my Logitech c925e is listed but it wasn't ticked (meaning it was being controlled by the Mac side). I selected it (now ticked) and tried again and the webcam image became perfect in the Teams desktop app.

On a side note:

I tried checking the drivers and it seems that it's using the old Microsoft driver (21/06/2006, v10.0.17763.1192). There were no further updates when I pressed the Update Driver button and I couldn't find any drivers for my webcam on the Logitech site, though I did download and install the Logitech Camera Settings app (which didn't fix the green screen issue).

So, when Windows took control of it again, it must be using the old MS driver... which seems to be enough to get it working correctly. And when the Mac side was controlling it, who knows what driver (if any) was being used, hence the issue.

This thread seems to have narrowed the issue down to AMD graphics cards/drivers and Teams. I can confirm that my graphics card is also AMD and my camera works fine in other apps. When I disable the driver, my camera displays fine in Teams. Using Teams from the web (https://teams.microsoft.com) also works. Unfortunately, I am still searching for a solution. Downloading the latest driver from AMD did not solve the problem. Removing the driver and letting Windows install a driver also did not work.

@SSSobel I tried everything I could possibly think of, including a full rebuild, but eventually just swapped out the AMD card for Nvidia one and have no problems since. I have seen the same issue twice more on sites I support since posting originally, and card swap has resolved both. I know this is not a fix if you are on a laptop but best I have at the moment.