I've been using teams only a short time now, and I've found that I really like it. There is, however, just one small, workflow-breaking issue that has been occurring repeatedly for me, many times a day: The entry created for the Teams client in the Windows taskbar does not have a context menu!

As anyone who has used Windows in the last three decades or so is aware, you can right-click on the taskbar entry of any running application to see a simple context menu, typically containing "Close" "Maximize" "Minimize", etc. Around the time that Windows 7 was released, this menu was supplanted by the "Jump List", a somewhat-similar but less consistent alternative. The standard context menu, however, did not disappear, but could still be brought up by pressing shift while right-clicking.

I took a disliking to the jump list paradigm, finding it substantially less useful in nearly every situation compared to the older context menu. To restore my workflow, I made a simple edit that reversed the "right click" and "shift+right click" actions: a standard right-click now brings up the context menu, and a shift+right click brings up the jump list. In the intervening ten years since making this change, it has never caused a single problem for me.

Until installing the Teams client. Teams does appear to have a jump list, which most users can access by right clicking the taskbar entry, and which I can access by shift+right clicking. The standard context menu, however, is entirely absent. Try it: hold down shift while right clicking any other running application, and observe the context menu appearing. Here is an example of the Signal client showing the typical menu: 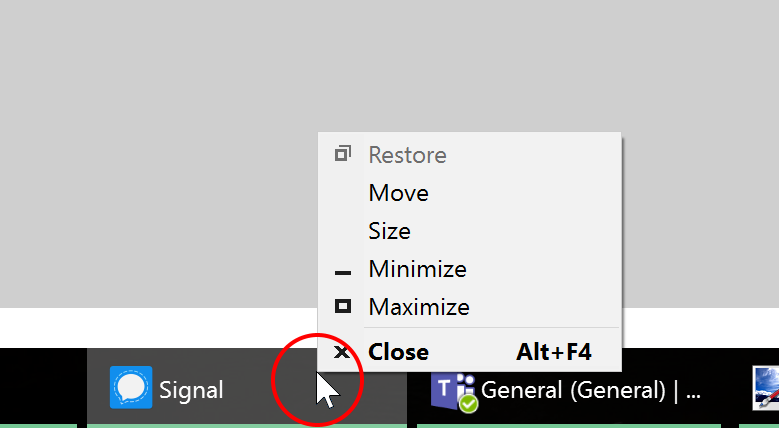 By contrast, here is what happens when I right click (or a typical user shift+right clicks) on the teams entry:

Though I have right clicked on the entry in the above screenshot, no menu has appeared.

The absence of this menu has significantly limited my ability to interact with the Teams client. While I can still access the jump list with a shift+right click, this combination is too cumbersome to qualify as an acceptable workaround.

Is anyone aware of a way to restore this missing functionality? Are any Teams developers able to share any insight into the problem? Is there a more appropriate forum in which to discuss this problem? I'm open to any and all suggestions and comments.

Teams client is built using Electron, as far as I can tell other Electron apps also don't have this Shift-Rightclick menu, VSCode for example. I guess it's just something that electron doesn't provide, while I appreciate that you've worked this way for a long time, it's quite a long way from how everyone else works :)

If you would like to let people know that this is something you would value please add it to https://microsoftteams.uservoice.com/, who knows if there are a few hundred other people who work like you then you might get them to look into whether they can find a solution. Good luck!

Hi Steven! Thank you for your suggestion, I will see about opening a topic over at user voice.

However, I can state with absolute certainty that this issue is not in any way related to Electron - Signal, the 'other' application I used for an example screenshot in my original post, is an Electron app, and has no problem showing this menu. I chose Signal as an example for that very reason.

VS Code, contrary to your assertion, also does not have any problem with its context menu: 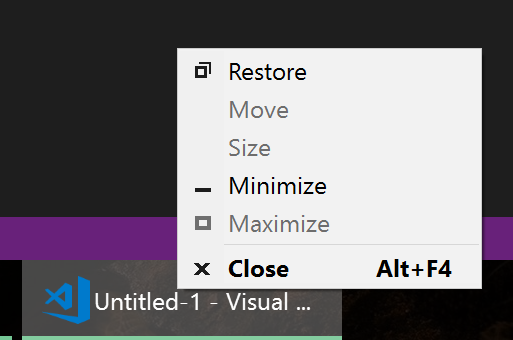 I've tried a handful of other Electron apps (Hipchat, Discord, etc) and confirmed that none of them suffer from this problem. Other Microsoft products (Office 2016, 365, Skype, etc.) don't appear to have any issue. I can only conclude that the bug belongs to Teams and Teams alone.

Well, my VSCode certainly isn't showing that menu on Shift-Rightclick.

Your response has lead me to a useful insight:

I spun up a VM and installed VS code, and sure enough, in an as-packaged configuration, VSCode does not present a context menu. After applying my configuration file, it does. I've narrowed the change down to one setting:

"window.titleBarStyle": "native"
I've configured VS Code to use a native title bar rather than the menu-in-titlebar that was introduced a little while ago. When that change was made, I immediately reversed it through my settings, and as such never had a chance to notice the absence of a context menu.
Teams also sports a non-traditional title bar (or window frame). Is it possible to force Teams to run with a proper title bar/native window, via configuration, command-line argument, etc? I'm feeling fairly confident that this is the cause of the bug, but it would be nice to be able to test.
0 Likes
Reply
Highlighted

Is there any mechanism whereby I can report a bug for teams? All I can find is this forum and the user voice site. As this is a bug and not a feature request, I feel it would be disingenuous to post about it at user voice.

If you are a tenant admin then you can raise a support request through the admin portal.

I don't remotely see how this would be a bug, it's not doing something you would like it to, that's more of a feature request which would be best through uservoice. I imagine support will direct you there.

Thank you Steven, I am indeed a tenant admin and have raised the issue with my support rep. I am awaiting a response.

I'm glad I'm not the only one who misses the right-click context menu for Teams.  Its absence is annoying when trying to close the Teams window.  Ah well, I guess the world moves on.

@David Doster This is what I get when I right click on Teams icon. 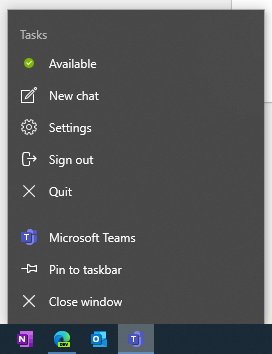 Right-click also provides me with the expected behaviour.  Attached are my Windows and client details, FWTW.  I also wanted to express my appreciation for the professional and knowledgeable correspondance between Charles and Steven.