I have installed teams app for free.

I have created a microsoft account and login to teams app and created meetong room.

I cannot login to Teams admin center to activate guest chat so that guest users can see and write messages on chat.

How can i login to admin center to enable chat messages for guest?

Not being harsh when I say this but you cannot.

That is one of the limitations of the Free version over the version that is bundled as part of an M365 plan.

Alternatively you could attempt to add a Guest user by way of adding to a Team and that would kick off more of an invitation process whereby the person you are added should have the option to create a Microsoft account if they do not have one already.

Thank you very much for reply.

I think I will tell the Guest users to make an Microsoft account and then I will add them to the team that I will create.

That should work, but it should be enough to just add them to a Team and it will kick off the invitation process that will cover scenarios where they may not already have a Microsoft account.

How can i do that in correct way?

I do that and for example if I type a gmail adress, that circle loading is spinning...after couple seconds the messages appear : we didn't find any matches...in the end the button Add is not activated 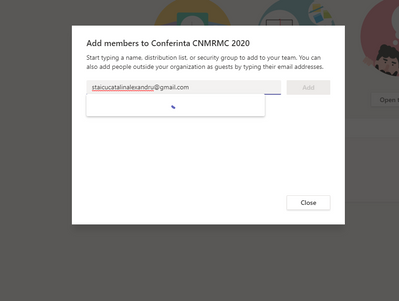 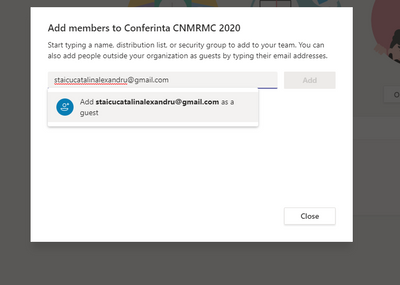 Not working...even if i select staicucatalinalexandru@gmail as GUEST, the button add is not active

How odd as you have done everything perfect and it looks like it is going to work but then fails at the last point. So you should be getting to this point: 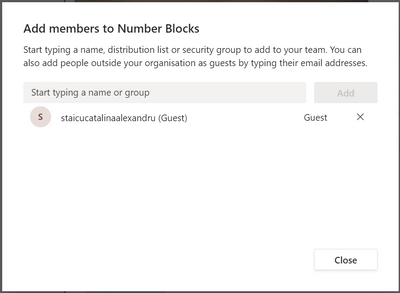 I will have a think about what could be causing this. However we are going to be limited with some of our options due to this being the Free version.

I did the above with my free account too.

I might have a really hacky way at achieving this but I will see if I get time to test it this evening and report back.

Can I just double check you are using the free version of Teams as I have re-read your first post that says Teams app for free and wanted to be sure you were not just talking about the mobile app being free? I am sure you are not but just want to be sure.

I conncect from my PC, is Free version

I don't now what was the problem.

Can you tell me please why in one account I see the Manage.org button and in other now? 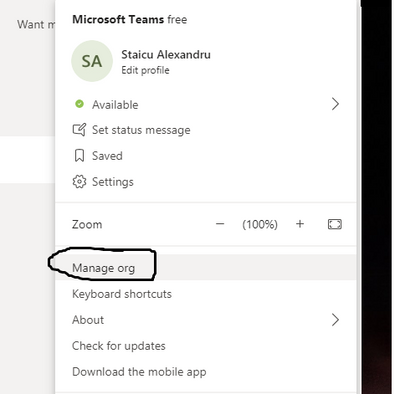 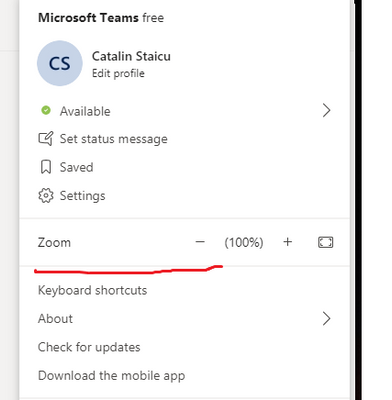 And another questions is, how many people can I add to a meeting ?

Thank you so much and sorry for this questions

Limits of Free vs Paid for:

For features that are available in free and no specific limitations for it, it comes down to general limitations of Teams:

The below is taken from the above link in regards to meetings:

As for the Manage Org link, that is a new one on me but after checking I have come to this conclusion:

It must be a new way of handling existing accounts that have accumulated within a Free Teams Org and looks like a handy higher level way of adding in accounts and inviting people. I am impressed.

As for the why in one and not the other, as with a lot of features. Particularly if new, it may just be a trickle effect and has not been updated to reflect this change in the area that hosts one of the your Free Teams Orgs over the above.

The above is of course speculation, so do not take it as gospel.

Thank you for reply.

So, to be clear I understand, if I do a meeting, and send the link meeting after I press meet now button, it is possible to acces that link let's say 300 people (Guest - users without a Teams account), the chat will not be accesible by guest, but the video will be active for all 330 guest?

Question2, if above question is pozitive, if I add 300  members to a meeting (add member by e-mail address), members that will create microsoft account to login to teams, and start a meet now, send invitation by e-mail...all 300 members can join in meeting room, and video, chat and microfone will be aacessible?

I use free version of teams

Sorry for this repeat questions. In Octobre, I must prepare a video conferencing, and almost 300 people will register to it.

I think what you really need in this scenario is the paid for Teams and make use of a feature called Live events. That would make your life so much easier from a conference stand point where the participant could be anyone and you then have a select amount of presenters controlling the content.

For the free version, you are loosely right, although not sure about the 330 as that exceeds 300. That is another thing Live Events has a much higher participant limit.

The other thing is that really you do not want to be adding in Guest accounts for the sake of a conference really, so with the Link method you could do the Meet Now or Scheduled and provide that link. Which I think is what you were proposing to do. When setting up the meeting you can also go into privacy settings and allow only people in your Org to present, that might help with the presenter side of things.

I also found it a bit hit and miss when adding external, so the best outcome I got was when going into the Manage Org option you identified, adding in the Guest via email invite and providing they had gone through the Invite process I was then able to join successfully.

Also from a chat perspective, if the meeting is created outside of a Team, so via Meetings on the left Chat is available and after the meeting you would be able to go back to the chat via the Chat navigation element on the left.

If the meeting is created from within the Channel of a Team, then yes Chat is only available to those that are members of the Team.

I would say that the Outside of the Team method technically fits the bill better though, as this is a conference and not a Team of people working on something as such.

I would also consider the paid for version of Teams as it has a feature that was made for this type of scenario, which I think we are really trying to imitate.

Thank you very much for youre time and response.

For this confference I can't acces the paid teams version, we have some strange policy in the institution. But in the future I will tell them that is a must tu buy the paid Teams app.

For now for the almost 300 people I have two options:

I think , fast one is solution, is easy for guest ( they don't need to create a teams account), they can join now thru link, only typing the name.

Thank you again, you where so kind to answer my question.

So , I just have ended a meeting with 45 Guest User (I added to Manage team- add member). They all are Guest users.

I have a question, how can I view who participated to meeting after the meeting video has ended.

and  how can set app to disalow owners to make video Meeting?

However the last time I checked, this was only an option whilst in the meeting and not afterwards. Also this may not be present in the free version.

As for the disallow video meeting, could you explain a bit more please?

Do you mean whilst in the meeting, you do not want people to be able to show video, so effectively the meeting is audio only, bar yourself who will be video/screen sharing?

Live Events spring to mind but you don't get that in the free version. Teams at its core is designed for two way collaboration. That is way Live Events comes in for more conference style sessions.

You do however get some meeting options, which are as follows:

1. Set who can bypass the lobby

2. Who can present, such as just yourself but not sure this will disable video but it would at least stop sharing content. So this will be your best option to set and see how you get on.

You will get the chance to select meeting options when scheduling via the meetings left hand nav option or when within a meeting you should have a link for meeting options too.

Sorry for this late answer.

I just want quest people not have permision to press Meet now button. I just want they can only Join a meeting, not create one..

In that case when creating a Teams meeting, don't associate it with a Channel of a Team. That way there will only be the meeting to join. As opposed to being added to a Team as a Guest.