We have an issue with Poly X30 and X50 where after someone else with their video turned on joins a meeting it kills the video from the room. When they join, it causes the room to show as either a black screen, the Teams icon for the account or frozen on the last frame. Advice I have found online says to toggle video on and off for the room but this has not helped us.

If they join without video on, the room video displays fine but defeats the point of a video conference.

Has anyone else experienced this issue and either found a workaround or fix for it?

We update via Poly at the moment rather than TAC

Looking at the Microsoft docs, the last certified Poly update was 3.3.1 so will be rolling back to that if I cant find a fix before people start coming back to the office.

Do you have a TC8 connected? We found an issue where some users could seen video some of the time until we unplugged the TC8. It seems with the new update, I'm guessing here, that the TC8 is seen as a video source?
0 Likes
Reply

We too had the same issue.  unplugged the tc8 and video works consistently.  Logging a ticket with microsoft next. @stewiedoo

Looks like the 3.5 update has fixed this for us. Tested it on one x30 for a week.

@stewiedoo Has it continue to work? We have some issues here w3.5, been going around in circles with support and fw updates.

We have had this issue with our two X30's for months. They shipped with video that never worked. We have had tickets with both Microsoft and Poly. It appears that Poly is on disaster recovery, as none of their support will admit to the problem or do anything to resolve it. We have been strung along for months waiting on the next version to fix the issue and it never does. 3.5, 3.6 and now 3.7 and we still cannot get video. I wish I had a solution, but I am personally coming to grips with the fact that these devices were a waste, and we should probably just toss the X30's.

Sorry just seen this message. Unfortunately it still isn't working properly for us. We find that a daily reboot seems to help the issues with 3.7 but still nowhere near 100% working on its own. If we don't reboot in the morning, I can guarantee that it will break by lunch time. Didn't get anywhere with Poly support or out third party support team
0 Likes
Reply

I agree with that. Still not working perfectly for us either. Unable to get any real support for it. Going to ask if we can get something like the logi rally to test to see if it's any better. Wish we knew about the issues before we ended up with 60+ X series devices
0 Likes
Reply

I finally got a decent answer from a support person at Poly. These fraudsters are just recommending waiting for the next version of the Teams app. This is rolling out in the Teams Admin Center and should be fully deployed by the end of the Month. I am not holding my breath that either Microsoft or Poly will fix this issue. Below is the email form Poly "support"

As for the long standing difficulty with these devices, the intermittent failure to transmit video has been an acknowledged Microsoft issue. The options to mitigate or avoid this issue are not great until we get a working fix from them.

Ideally this new Teams app version is delivered this week and fixes the issue.

However, there are other workarounds that customers have implemented:

Again neither workaround is great, using without TC8 is clunky and RC Teams is additional expense/setup.

I certainly understand your frustration but these are the only 3 options at this point.

Basically they know it is broken and apparently can't do anything to fix it. Last Time I will ever purchae Poly equitment. Our business has purchased VVX phones and x30's to work with Teams this year. So far both products have been plagued with issues to the point that they are unusable. We finally had to get beta frimware on our vvx phones just to use them for calling. Microsoft needs to do something aout the quality of these updates. Or they need to remove Poly from the list of Teams supported vendors if they are going to have major technical issues that go unresolved for months. I personally feel misled by both Microsoft and Poly. If it were my business, I would be lawyering up to recoup the wasted productivity time of my employees, and potential loss of business due to our inability to communicate with customers. What Poly and Microsoft are doing is theft or fraud. It effects my reputation as a technical administrator in our company when I am not able to fix a business critical system.


*Done yelling into the void*

Now that VideoOS 3.8.0 has shipped, does anyone know if this intermittent video issue is resolved. I can find nothing in the release notes that suggests it has. Suffice to say, I’m not holding my breath.

Still no update on the HDMI ingest either ? Thanks

Running all the available updates did solve our issue. It only took 5 months of botched patches. 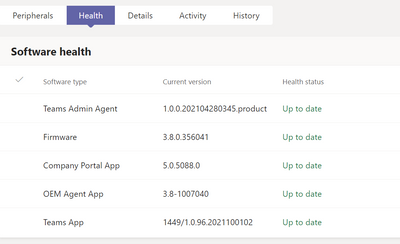 Above is our currently working config. Firmware and the Teams app both needed to be updated. I had some weird stuff going on with the Teams admin center after updating the firmware. Not displaying the room name and forgetting the TC8 tablet exists. There is still a persistent problem where the video drops at the begining of calls for a second or two, but it has started back up each time. Certianly better than no video at all.

This is still a recurring issue, it worked for while but since february 2022 we see this issue again...
0 Likes
Reply

Neither Microsoft or Poly is interested in properly supporting these products. My experience trying to get this to work was an utter waste of time. We will no longer purchase Poly products and have started outfitting our conference rooms with Logitech rally bars. It is a shame that consumers are not properly protected by fraudulent companies like Poly, who are willing to take your money and ship broken software updates that breaks advertised functionality. Software support and hardiness is just as important as hardware support. Poly is not sustainable because it is not properly supported. @KH00T