We have a small problem in the deployment of Teams inside our organisation. Perhaps someone can guide us : one of our user can't customize its left bar (pin apps like Planer, OneNote, ... reorder apps, ...) whereas all other can in our organisation.

As Teams Admin, I've taken care to setup app policies the same way for all users (in fact we only have one global policy), especially I've well activated the "Allow user pinning" button in it (cf https://docs.microsoft.com/en-us/microsoftteams/teams-app-setup-policies). And if I add pined apps in the app setup policy, the user well see them appear but stil can't move/pin apps ... like "Allow user pinning" button has no effect for him. We really don't understand why.

Additional tests we have done :

We are running out of ideas ... if anyone has some, it would be useful, thanks !

Last point : user who has the problem was a very early beta user of teams in our organisation (since end 2018) ... perhaps something specific of the Teams very first versions is still activated for him !?!?

Captures of Teams Admin center. It has been kept simple and all users have the same Global policy. 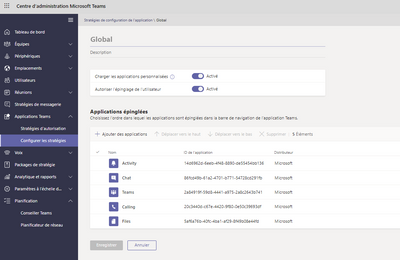 As it's an issue on the web client as well as the desktop client could be something on the back end. Could try forcing the policy with Powershell

Let me know how it goes

It could be a rollout issue, sometimes some users don't get updates when others do. Could be whats going on here that that user for whatever reason still doesn't have the update or it's stuck in cache on the back end for them etc. This is a pretty new feature that just started rolling out so it could be that as well.
0 Likes
Reply
Highlighted

I encounter same issue. Do you have the resolution?

Ignite Live Blog: BRK1066: Collaboration on the Go with the Teams Mobile App