We have removed O365 licenses and disabled user's in AD but still those user's are visible in Teams Organization.

This is showing on Teams Desktop app as well as on Teams Web online.

Please guide to fix this issue.

Teams is in many ways a separate user interface into the SharePoint site that sits behind it. Just because you remove someone's license doesn't remove them from the team. If you have used a group in AAD to populate the team members, then the user should be removed as far as the members list, BUT . . . just like any SharePoint site, for historical reasons, the person's name isn't going to be removed from conversations or files stored there. They all need to be associated to a user and when a user leaves, their content doesn't disappear.

If you have added users individually to the team, then you have to remove them individually from the members list also. Removing their license removes their access, but does not take them out of the tenant nor the team.
0 Likes
Reply

When I check particular user's "Organization" tab, then it is also showing users(highlighted in blue) who are removed. It should not be shown there. 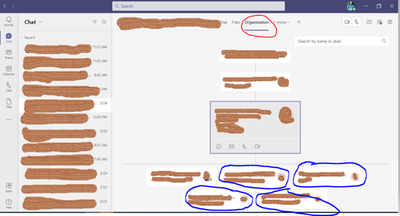 The issue has resolved after clearing the Manager attribute from AD.
0 Likes
Reply