Multiple response recorded in Poll from a participant

Multiple response recorded in Poll from a participant

I tried a Poll from Teams in a chat with a test question poll and multiple choices can be selected. So, the number of participant is only 2 (it is in a chat with colleague for testing).

How this can be happened? 3 responses from 2 participants? 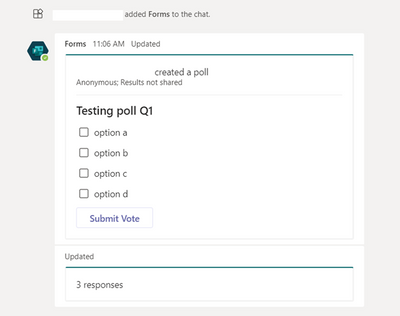 Re: Multiple response recorded in Poll from a participant

Hello, I have reproduced what you described. In my scenario it was even worse as I also selected "anonymous response" which it was initially in the first response, but not after a while in the second response. So incorrect all over. I only assume here, but there has been some major incidents affecting multiple M365 services and this could be a side effect of that. You can always open up an support ticket for an official answer.
0 Likes
Reply

Include hybrid students with apps in class meetings