Since a couple of weeks I'm experiencing terrible video performance on my Surface Book 2 15" using Microsoft Teams in either browser or Windows app.

Every time I have a online meeting my GPU flatlines at 100% doing 3D work. The performance of my machine becomes so bad, I cannot work normally.

I have tried everything from installing latest firmware, drivers, updates, and even repairing Windows. I do not have the same issues in other video call software.

Does anyone experience the same issue? Any pointers?

Tried disabling hardware acceleration in the browser?
I’d also check around the video settings on the graphics card! We have these machines at work but never heard of any issues..(afaik)

I'm having the same problem @Mark Priem but on an XPS 15 7590. For me, it's actually Desktop Window Manager which ends up consuming a huge amount of GPU 0 which is the integrated Intel chip. I've managed to change the settings in the Nvidia settings to prefer the GTX1650 in the global settings which has improved things a bit, but there's something wrong since the March raft of updates. If you have a discrete GPU in your Surface book, try open the NVIDIA Control Panel > Manage 3D settings > Global Settings tab > Change Preferred graphics processor to "High-performance NVIDIA processor. I've also added Teams explicitly in the Program Settings tab, but this shouldn't really be necessary.

Currently on a video conference and I'm seeing the following:

There are theories on this being something to do with scaling (which is possible as I have a 4K laptop panel often connected to two 2K 28" monitors) and so Windows has to handle multiple scaling, but even harmonising the scaling settings has made no difference to me.

There were also theories on Power settings and I've turned up the power utilisation when plugged in as high as they'll go, but that's also had no impact. Even went to the extent of enabling extra advanced settings by changing the CsEnabled from 1 to 0 in HKEY_LOCAL_MACHINE\SYSTEM\CurrentControlSet\Control\Power and set these higher but it still made no difference. These are the kind of things you can set when you enable those options: 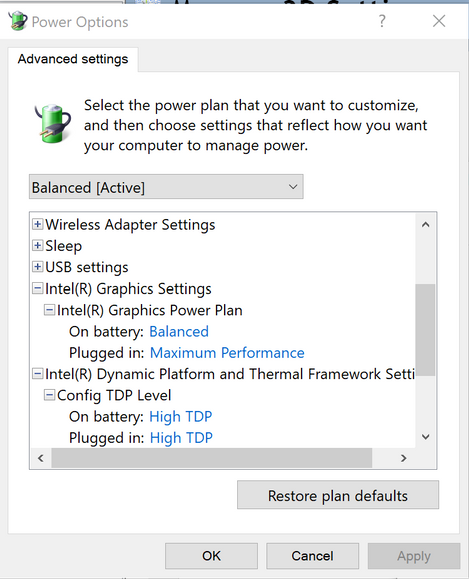 It's really weird though because there's a whole thread on it here: https://answers.microsoft.com/en-us/windows/forum/windows_10-performance/desktop-window-manager-dwme...

I don't know whether it's possible for someone with a route in to Microsoft to raise the profile of this but it's affecting thousands of users and shouldn't be considering the specs of some of the machines are huge and ought not to be having issues with fairly low impact apps like Teams or Zoom which seem to trash my laptop's performance like I'm trying to fold at the same time!

@Barry_PointWireHaving similar issues but I have not had the time to spend the time debugging/testing/frustrating everyone else on my meetings.