Notifications when a new conversation is posted to a channel

However, there are only three corresponding per-channel options: "Banner and feed," "Only show in feed," and "Off" : 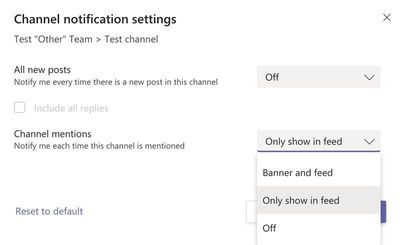 If you tweak the main/default settings, here's how the four default settings translate to the individual per-channel settings:
This is highly confusing because the main "Banner and email" and "Banner" setting both map to the "Banner and feed" setting, which doesn't mention "email."  However, I know email works with this setting, so maybe it should be called "Banner and Feed and Email," because that's how it seems to work.  I assume the fact that these values don't align in a bug of some sort.  If it's not a bug, I can't yet make sense of it.
Can any of you help me with this confusion?   Are some of these known "bugs" that are getting worked out?  Thank you!
Labels:

656 Views
1 Like

2 Replies
Reply
2 Replies

Hi @Glenn. I agree it's confusing and I'm interested in seeing an official answer to these quesitons too. I too think that 'Followed channels' in Teams Settings > Notifications, is an orphaned setting. I've seen Microsoft Support docs that previously pointed to the "Follow a Channel" topic, redirect to setting Channel notifications at the channel level. So it appears you can't even find out from support docs, what the setting 'Followed channels' actually does.
1 Like
Reply

@Darrell WebsterThanks very much for the feedback.  Even if the 'Followed Channels' notification settings is indeed orphaned and does nothing, I still wonder what replaced it?  In other words, as far as I can tell, the 'All new posts' setting for every channel in your shown list is now always 'Off' unless you manually change it for each channel individually.  Back when the single 'Followed Channels' notification setting worked, you could at least use it to set your preference for all current and new channels without having to attend to each one individually.