My company (for legal reasons) DOES NOT want persistent chat nor do they want to keep any backups of the chats. This is NON-NEGOTIABLE as legal has already put their foot down. Currently we're using Skype for Business/Lync but as you all know this is clunky, can't easily be integrated into the Azure deployment (Microsoft company Portal), and doesn't offer the quality of life improvements (ie: notifications) that most companies need in this day and age.

Can teams (or a script on our Azure network) be set to auto remove or disable entirely persistant chat in MS Teams. To be clear, we STILL WANT EMAILS TO BE SAVED FOR 7 YEARS. But again, FOR NON-NEGOTIABLE LEGAL REASONS we cannot keep chat history.

Retention policies in Microsoft Teams could help with this, have you seen those yet?

"Teams conversations are persistent and retained forever by default. With the introduction of retention policies, admins can configure retention policies (both preservation and deletion) in the Security & Compliance Center for Teams chat and channel messages. This helps organizations either retain data for compliance (namely, preservation policy) for a specific period or get rid of data (namely, deletion policy) if it is considered a liability after a specific period."

Configure locations and how granular it is 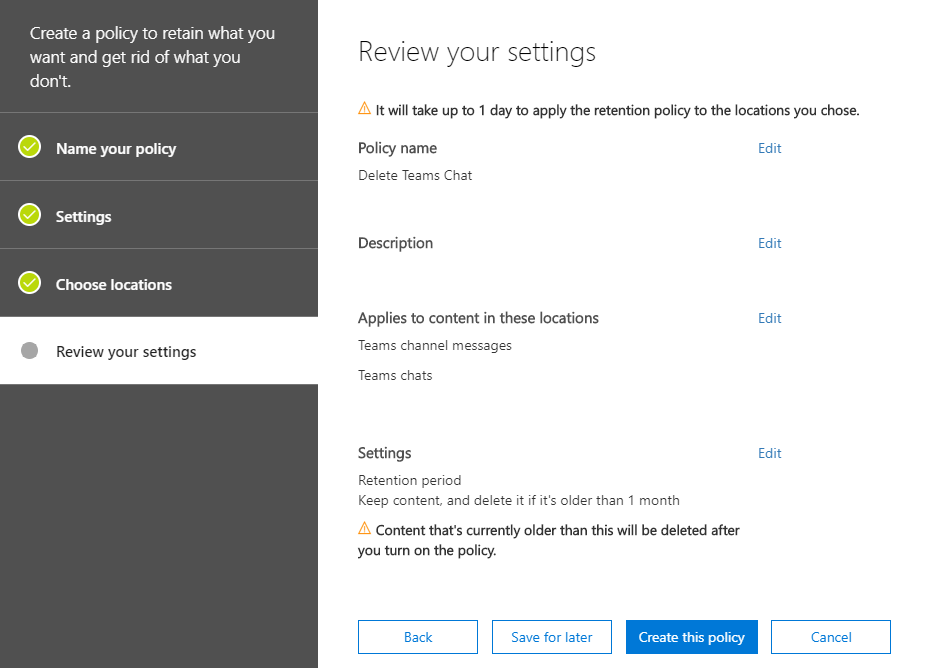 IMHO I don't believe that Teams will do what you need. You cannot turn off persistent chat and - if I am reading your requirements right - you need the chats to delete immediately after you have them. Even if you are using retention policies, then I don't think there is an implementable policy which you could set to delete the chats and remove them from Office 365 immediately: they would still be around for a period of time.

So I would say you may want to consider a third party application for chat in the immediate future.

Hope that answers your question

These comments are spot on.

For now the lowest option on the retention policies is that of 30 days.

If you need something for shorter periods (ie: every day) - the best option might be via Graph API. You can delete messages that way, but will need to target them 1 by 1... scripting it to grab all the Message Thread ID's from 1 channel and delete them via Graph and have it run every day... "might" work. But this is all very far fetched and would need a lot of testing :)

Logically though, it should work... might need quite a bit of coding and customization though.

Then something to delete it:

This is a very cool idea using the Graph - but like you say Marco its going to raise the ongoing management.

I guess - thinking about it - that in order to implement this successfully you would at least need to lock down the Teams creation process and do that centrally - and then make this part of the setup because it would be pretty much a nightmare to let users create teams and then have to identify which ones don't have this periodically!

@Cian Allner Where did you find this retention policy configuration? I looked under Security and Compliance and I don't have this option.

Note that the Security & Compliance center is being migrated to 2 separate ones: one for Security; one for Compliance.

In the new Compliance center: 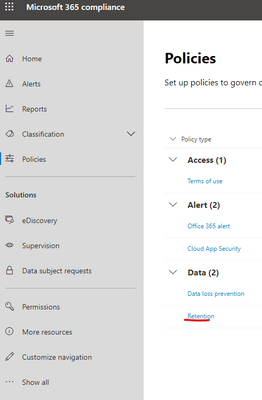 You will actually be linked back to the old SCC (Security & Compliance Center), then under "Data Governance"

Finally, you will have the typical screen, like Cian showed above.

Hi!
I'm having the same issue, since MSF ecosystem changes every month, I was questioning if you found any solution to clear meetings from the "history".
0 Likes
Reply
Highlighted

Has anyone found a solution to this or know when Microsoft will be updating the retention policies?

We are wanting chats to be deleted every day vs every 30 days.

I have a customer in the same situation. They do not want any persistent chat out of concern the IMs could later be used in a court of law. MS has advised they are working on a reduction of 30 days to 24 hours for holding conversations, but even with this change it still doesn't meet their legal requirements.

Is anyone aware of a tool through MS or a third party that allows you to create rules around content and redacts any statements that contain keywords as defined by the admin?

Thank you in advance.

As announced at Ignite 2019 earlier this month you will be allowed to set 1 day retention policies in Teams, which will solve this issue

Hope that answers your question!

@Christopher Hoard unfortunately they are not allowing 24 hour retention on chats.

Teams retention policies do not yet support:

@Christopher Hoard unfortunately they are not allowing 24 hour retention on chats.

Really? If that is the case it would seemingly contradict this Microsoft 365 Roadmap item as well as their own announcement and sessions at Ignite

As said previously this is something announced. It will be here in the near future.

All this talk of wiping chat logs and such... why?
Other people have cited "Legal Reasons" as well but unless your discussing shady stuff in your chat... I don't see how this helps because:
Everyone I know, knows how to take a screen shot.
If they want to use something said in a chat against you in the court of law then all they have to do is screen shot it.

Screen shots can be taken on PC, on tablet, on phone and you have no way to protect against it.
I'd say if you are relying on your Data Retention Policy to CYA when it comes to a chat then you don't really understand how modern devices work...

Government entities have retention periods they must abide by. This means certain records like documents or email should be deleted after the specified retention. This is to protect those organizations that are forced to provide documents for public records requests. That is why retention is a requirement for chats because with Skype for business you could just disable history. Someone taking screenshots wouldn't be a known record by the organization.
1 Like
Reply
Highlighted

I am not in the legal or governance departments so I am not sure their reasoning. My guess is that they feel that not knowing what is said, even though someone can still screenshot it, is better than dealing with potential fallout from the customers or co-workers raising legal questions. I however, am not sure and do not speak for my company nor their goals as, again, I do not know for certain their reasoning. But with the retiring of Lync in 2021 I hope Microsoft can do something to help us disable persistence.

Why didn't MSFT simply design it like Skype for Business? In SfB, you can simply go into the app's setting and disable the saving of the conversation. Once you close out of the conversation, it's gone. Whether it's 24 hours or 30 days.

Great point.  People complain because they are given an edict that wasn't thought through and the product doesn't do what they want.  Its a COTS service folks.  If you don't want Persisted Chat, don't use it.  FYI, you can turn off chat in Teams.  But arbitrary demands such as, "I want chat to disappear immediately after the user(s) are done" is plain dumb.

"legal reasons" is an excuse and an indicator that those folks didn't understand what they were buying.  I have had many discussions with various customer legal teams; chat is not informal - no different than email.  If folks are concerned, they should use the encrypted audio.  One day retention on chat is available.  If that doesn't work for you, don't use persisted chat services like WebEx Teams, MSFT Teams, Slack et al.

I wonder if folks apply the same "deal breaker" rules to SharePoint Teams, Yammer, Facebook and others?

I hear this is how SnapChat works.