I started to have a frustrating problem a few weeks ago.  In the past I have no problem joining some of my client's Team meetings as a guest with the Mac desktop app but recently the desktop app asks me to log in and does not give me the "join as guest" option.  I know the issue is not on the meeting setup side because other colleagues can join the same meetings as guest with the Mac desktop app and I can connect as guest to the same meetings via the web app and iOS app just fine.  Part of the issue may involve my company uses Office365 but not Teams so if I do log in with my company id it tells me I don't have access to Teams or the client meeting.

It seems like there is something mis-configured on my Office365/Team app desktop side.  I did uninstall the Teams desktop app a few times and let it reinstall again as I tried to join a meeting - same issue, can't join as guest.  I then followed the MS instructions to completely remove the entire Office365 suite from my Mac that was very detailed including going into various folders and removing configurations files etc. - I can reinstall our Office365 desktop apps (Work, Excel and PowerPoint for us) and they activate fine with my company id but the next time I try and join a client meeting with Teams once it re-installs the Teams desktop app I have the same issue - wants me to log in and no option to join as guest.   Is there a local setting I need change or some local configuration I need to get rid so it lets me join as a guest?

This is the dialog I get - no guest option. 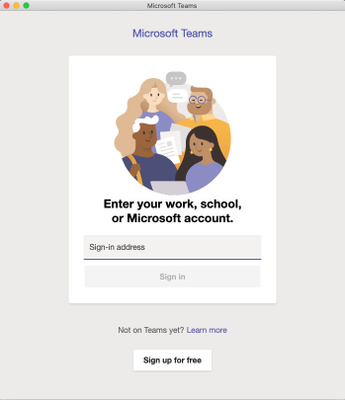 Digging around my Mac for anything else Teams related I came across a "Teams" folder with a bunch of files and subfolders:

Since I don't use Teams for anything else other than joining meetings I figured no harm moving the folder to trash - went back to a meeting link which fired up the Teams desktop app and guest access is back!

Posted in case someone else has the same issue - should be in a FAQ somewhere.

I was just about to suggest that, but didn't know where on a Mac it stores local cache like PC, thanks for letting us know ;).

Also any reason why you don't just join via browser? Safari should now be supported for meetings in addition to Chrome. I mean, the video feed showing more people is the only real difference I can think of along with background blur.
1 Like
Reply

For some reason the video quality on the Web client isn't as clear, especially when there are lots of video participants. I was just using it as a fallback when the desktop client was giving me problems.

@mgwalker were you able to figure this out? I'm having the exact same issue. Have tried the recommendations posted in this thread, but no luck. Open to more ideas. Thanks in advance!

I am also having this issue.  Is there an agreed fix?

Include hybrid students with apps in class meetings